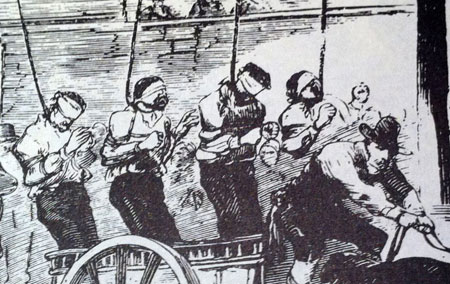 Newly spawned London based doomers PEACEMAKER are streaming the track ‘The Siberian Problem’ which is taken from their debut album that is due to see the light of day in the first part of 2012, if like me you’re thinking, who are Peacemaker, I need to know more, then here’s hyperbole the band sent over…

“Peacemaker were formed in London in 2010. Sam Taylor and Rich Maw– former members of Humberside death metal band Infliction– contacted former Satanic Fatwa bassist Al Lawson and embarked a musical quest. Eschewing any scene, trend or nod to what was currently in vogue, they instinctively knew they had to play: True, Old School, Doom Laden Metal.

Songs were written based around cyclical patterns of riffs. That single most important element of metal is so sadly lacking in the “metal” landscape of today. With an album of music written and rehearsed the search was on for a vocalist. Ravens Creed (and former Satanic Fatwa) frontman Al Osta was recruited from his lair in Leeds and quickly pledged his allegiance to the cause.

Their debut album, recorded during the winter of 2011, is testament to the band’s faith in all that makes genuine metal- tortured vocals, huge riffs, crushing drums and a sound downtuned so as to evoke the very despair of life itself. Song themes glory in human misery, failure and the futility of existence. If you have ever wanted to hear the aural equivalent of drowning in tar… this is your band.

Death to the Betrayers. Welcome to the Fifth Circle of Hell. Hail Satan.”

Now stream the track below or over on their BandCamp page here, then head over to their Facebook page and ‘like’ these downtrodden UK doomers.