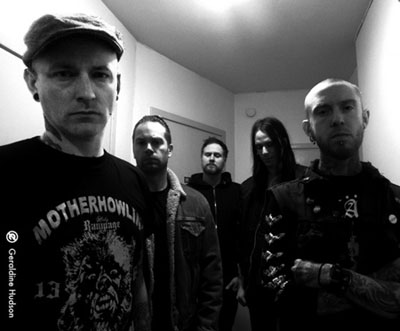 Humanity will feel WOLFBRIGADE’s wrath once again, as another track from the Swedish crust icons’ forthcoming LP Damned infects the world wide web. Courtesy of the diehards at Blow The Scene — who instinctively conducted a massive interview with the ‘BRIGADE back in January when the pack’s cooperation with Southern Lord was announced.

As loud as your system will allow, stream “Feed The Flames” RIGHT HERE.

The LP’s closing track, “Peace Of Mind” is also still streaming at the Southern Lord website as well as below.

The first of three Wolfbrigade albums to be released via Southern Lord, Damned is set for European on April 23rd and in North America on April 24th.

The 35-minute album was recorded at renowned Gothenburg-based Studio Fredman by Frederik Nordstrom (At The Gates, Amon Amarth, Opeth) and shows the band at their finest and most devastating hour in their storied lineage.