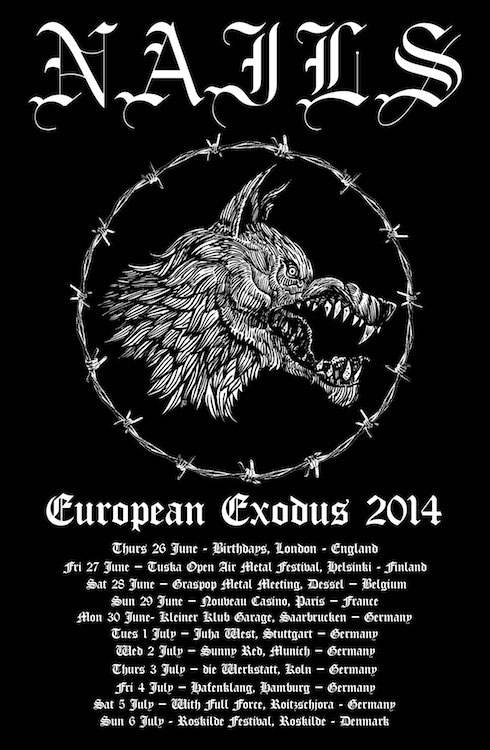 After selling out venues across the UK in November throughout their ‘Campaign For Elimination’ tour, NAILS are now setting their sights on mainland Europe and have announced a run of shows, including headline slots and notable festival appearances in Finland, Belgium, France, Germany and Denmark. What’s more, they have announced an exclusive London show to kick things off. Todd Jones comments…

“NAILS will be returning to European soil June-July 2014 to celebrate the release of Abandon All Life with our Tyrants across the Atlantic. We’ll be playing legendary metal festivals such as Tuska Metal Open Air, Graspop Metal Meeting, With Full Force Festival, and Roskilde in Denmark, as well as multiple headlining shows in Germany and one in Paris. Before arriving in Europe, we will be making a stop in London to play one exclusive show in the UK. Last November we played some of the best shows we have since our inception in the UK which ended with a sold out show of 500 maniacs at the Underworld. We’re going to play at a smaller venue this time around for the people who couldn’t get into the last gig in November. If it’s anything like our last London gig, it’ll be one for the history books as well. Looking forward to shaking European/UK soil with you all. HATRED AD INFINITUM”

NAILS are still supporting Abandon All Life which is out now via Southern Lord.