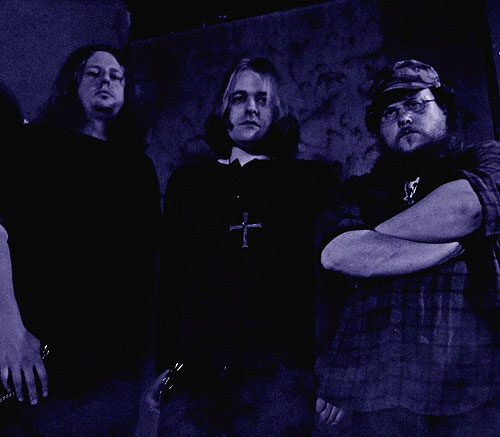 UK doom metal veterans MOSS return with a new EP to be released on the 31st of October on 10″ vinyl and digital, via their own label Stone Tapes.

A 100% DIY release in the truest sense and on gimmick-free black 10″ vinyl limited to 500 copies, Carmilla (Marcilla) / Spectral Visions is available to pre-order now from MOSS‘s official Bandcamp page.

Side A of the EP, Carmilla (Marcilla), can now be previewed below:

Read of for more info…

Since they emerged from Hampshire’s catacombs in late 2000, MOSS have tirelessly dragged intimidating amplification and metaphysical malignance down a murky and overgrown path to oblivion. Whilst their sound has morphed slowly from lengthy and devastating exorcisms of psychic horror to a comparatively traditional form of sermonising, the last decade and a half has only seen them draw closer to a motherlode of ceremonial ambience and otherworldly dread. Fuelled by classic doom metal and British horror yet in thrall to no-one but their own wayward co-ordinates, these three seers have created a formidable collection of audial documents that bear testimony to an unflinching fascination with the ghastly and esoteric. 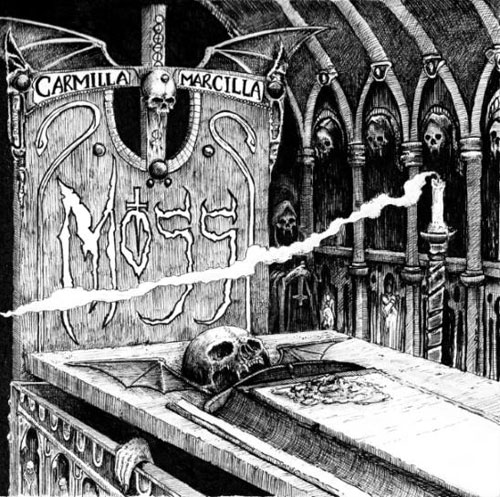 However, Hallowe’en 2014 sees the triuvirate encroaching on territory anew. Having released an album on Aurora Borealis and two more on Rise Above alongside untold EPs, live recordings and split releases, they now embark on their first release for their own imprint, Stone Tapes, having chosen not to renew their association with Rise Above after the release of 2013’s Horrible Night. A 10” double A-side EP limited to 500 copies, it sees the band in splendid isolation, expanding on the gruesome Grand Guignol atmosphere of their last opus in suitably monomaniacal fashion, and deploying grimly earthen guitar tone, death-knell battery and stentorian oratory to conjure otherworldly malice from beyond with deadly fortitude.

These two tracks draw on a sphere of influence that includes classic horror fiction, arrive swathed in unearthly feedback, and volley forth at a funereal pace. Yet they manage to effortlessly waylay both the preponderance of humdrum cliches and the needless barrage of volume and excess that frequently hold sway in contemporary doom-laden circles. Always a band out of time, the trio operate impervious to fashion or most any outside influence bar certain personal pecadiloes and the demons lurking in their own subconscious. These twenty minutes of tumult, recorded at the Cro’s Nest in Purley, by Sam Thredder, only underline the uncompromising and bloody-minded attitude that have rendered MOSS a primal force that transcends trappings of genre and scene.

The dawning of a new chapter in an uncanny saga, Carmilla (Marcilla) and Spectral Visions function as both an intimidating document in their own right and as portents of all manner of unimaginable entities lurking in the furthermost reaches of everyday perception. Yet as MOSS‘s power grows stronger, one can only wonder aghast at the consequences for all…