Burning World Records is  proud to announce the debut album by MONOMYTH. The album will be released September 16th 2013 on Double Vinyl, CD and Digital formats. Pre-Order your copy now on black, white or gold vinyl (or a package with all 3) or on CD from the Burning World webstore HERE.

Find more info about the band below as well as a stream the sample track ‘Vanderwaalskrachten‘.

MONOMYTH, unleashed from The Netherlands, is the journey . . .the five who explore and expand the boundaries of their own musical universe. Firmly rooted in Space, Trance and Krautrock, the band leans heavily on a solid foundation of drums and bass guitar, while adding guitar, keyboards and textures layer upon layer. MONOMYTH will drag you inside their cosmic playground. Enter an arena where there is no more time or space, simply the vacuum in which communication is operated on a higher level. You can enter in two ways . . . simply by closing your eyes and letting the instrumental music transport you, or with eyes wide open as you descend into the mind staggering light show. 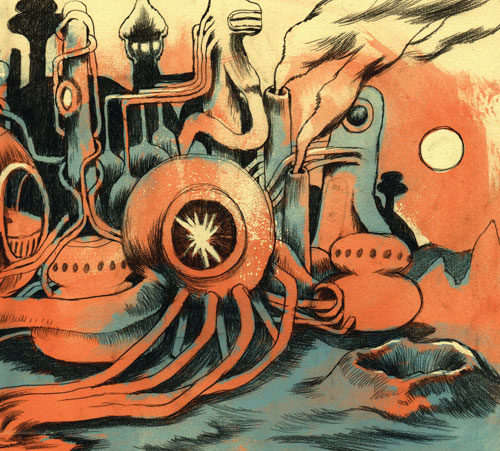 Recorded and produced by Monomyth.