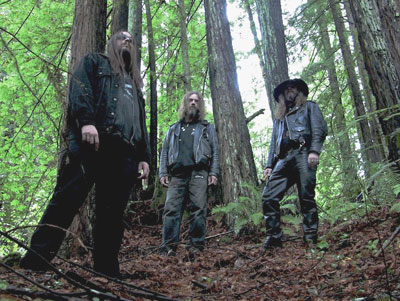 Portland, Oregon doom-gazers MEGATON LEVIATHAN, who completed a successful run of tour dates with cerebral black metal behemoths Wolves In The Throne Room this summer, are set to begin work on their as-yet-untitled new full-length. The record, which includes a “smacked-out version of Judas Priest’s ‘Here Come The Tears,'” according to the band, will be unleashed during the latter half of 2012.

Further comments vocalist/guitarist Andrew Costa on the direction of the new material: “The new tunes are dark but still retain the trademark MEGATON LEVIATHAN hooks and dreamy atmosphere fans have come to expect from us.It’s a transmutation of a lot of my personal experiences in Alaska as well as our recent trails and tribulations as a young band. It will be delivered in a way most everyone can identify with.”

The band is also working on a split release with LA noise band Actuary. Further details to be unveiled soon. In addition, the eclectic ensemble will kick off the new year with a short string of West Coast headlining dates.

Earlier this year, MEGATON LEVIATHAN reissued their 2009 demo on limited-edition vinyl through their own Volatile Rock Records. Limited to 500 copies, the 35-minute production takes listeners on a cerebral journey that transcends far beyond the traditional confines of heavy.