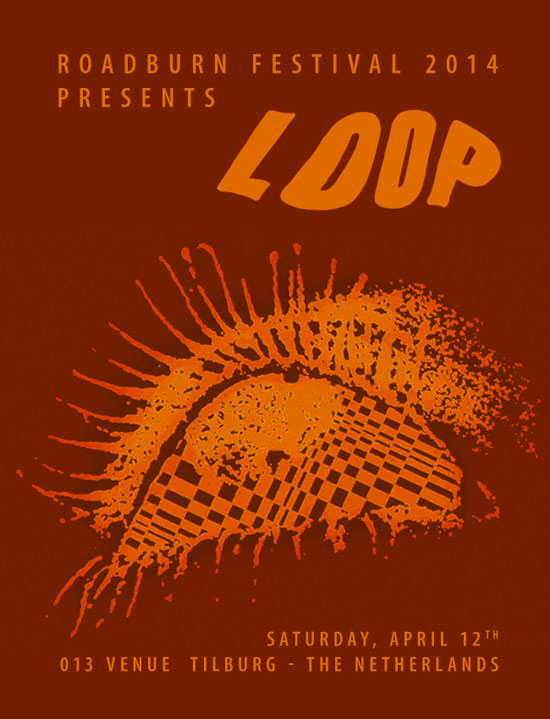 Roadburn are ecstatic, nearly speechless, to be able to announce that recently reunited kosmische drone-rock legends Loop will be the main headliner of Roadburn 2014, which is set for April 10 -13 at the 013 venue in Tilburg, The Netherlands.

Formed in London by mainman Robert Hampson in 1986, Loop fused the repetitive, rhythmic sturm und drang of the krautrock scene, NY minimalist synth-scuzz duo Suicide and the experimental sounds of cutting edge modern composers Rhys Chatham and Glenn Branca with the guitar-driven sonic attack of bands like The Velvet Undergound, The Stooges and MC5.

Instead of a psychedelic 60′s love-in, Loop‘s sound encapsulated the dark heart of the decade, the summer of love as a universe collapsing on itself, a black hole that became a pulsing void.

The band’s trancelike, sometimes claustrophobic soundscapes, delivered by Robert Hampson (vocals, guitars), Neil MacKay (bass), Scott Dowson (guitars) and John Wills (drums), and characterised by the spectral vocals of Hampson buried beneath layers of fuzz and wah-wah, have made a lasting imprint on the likes of Neurosis, Electric Wizard, Sunn O))) and countless others, as well as the Roadburn Festival itself.

From the first iteration, Roadburn has been covering contemporary, acid drenched psychedelia with Loop‘s revelatory, sonic pummel – best heard on their seminal albums Heaven’s End, Fade Out and A Gilded Eternity – as an artistic blueprint for the festival.

One of the high-points of Roadburn 2013 was Hampson performing Loop‘s ‘Straight To Your Heart’ with Godflesh as part of their ‘Pure’ performance, marking his return to both Godflesh and to rock guitar for the first time in 20 years.

When Loop‘s reunion was announced by Hampson, only a few days after his soon-to-be-legendary performance with Godflesh, we nearly had a nervous breakdown and we’re deliriously excited that the Roadburn Festival will finally come full circle with Loop‘s headline performance at Roadburn 2014 on Saturday, April 12th.

In other news, tickets for next year’s edition of the Roadburn Festival will go on sale Friday, October 11. More info will follow shortly.