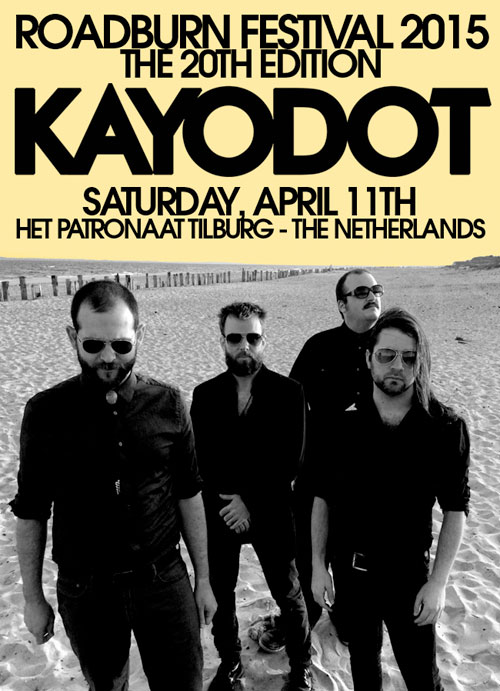 Led by founding member Toby Driver, Kayo Dot emerged in Boston, MA in 2002 from the ashes of metal group Maudlin Of The Well. Since then, Driver has led Kayo Dot through several lineup changes and dramatic stylistic shifts: from traditional metal, to atmospheric, avant-garde metal; and now with their new album Coffins On Io, the bats-in-your-belfry hard rock of Sisters of Mercy meets Peter Gabriel-era Genesis, Scritti Politti and early Roxy Music.

In 2013, Kayo Dot demarcated the beginning of a sonic change by releasing their critically acclaimed conceptual double-album Hubardo. Undeniably experimental, but largely unclassifiable, Hubardo received rave reviews: SputnikMusic ranked it among their best albums of 2013, and CVLT Nation called it, “mesmerizing avant garde blackened doom,” and a “towering achievement.”

But when it comes to Kayo Dot, change is the only constant. And like the best pop culture chameleons of the past, Kayo Dot’s evolution is governed by an inscrutable inner-logic. Despite the accessible songwriting of Coffins on Io and the emphasis on vocal melody and electronic percussion, Kayo Dot fans will find the record’s darkness and intensity familiar and relatable.

Roadburn have long been admirers of Driver and Kayo Dot, and with Coffins On Io imminent and about to blow listeners minds wide open, what better time could there be to announce that Kayo Dot will be joining them at the 20th edition of Roadburn, playing in Het Patronaat, Tilburg, The Netherlands on Saturday, April 11.

They hope you’ll join them at what is sure to be one of the highlights of Roadburn 2015.