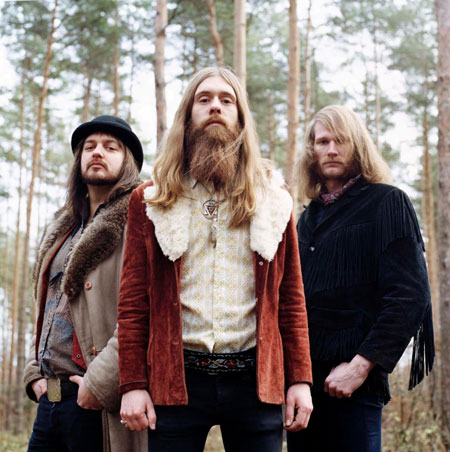 Nuclear Blast Records are more than happy to announce the signing of Germany’s most authentic and passionate psychedelic hard rock combo – Kadavar!

It was already with 2012’s eponymous debut album Kadavar that the three-piece from Berlin casted a spell on all fans of solid riff-driven yet doom-like 70’s hard rock à la Black Sabbath or Pentagram. Marrying this with the spacy psychedelic approach of early Hawkwind and mixing in a distinct own touch while preserving their icon’s warm vintage charm can doubtlessly be considered the trio’s key to success – astoundingly high vinyl sales and support shows for bands such as Sleep, Saint Vitus, Pentagram and Electric Wizard as well as stunning festival gigs at Stoned From The Underground, Yellowstock and Fusion Festival, among others, underline Kadavar’s status as one of the scene’s most exciting acts to watch in 2013!

Kadavar’s upcoming new album was recorded in Tiger’s (drums) studio, where he also took care of the production, mixing and mastering. It’s set for a release on April 5, 2013 and will be entitled,  Abra Kadavar.

As far as the album recordings are concerned, the multi-talent explains: “After last year’s final show had been played in mid-December, we started writing new songs. We’ve already had a couple of finished tracks in May 2012, but those were eventually released on a split-LP with Aqua Nebula Oscillator in November 2012, which is why we started at square one again. As we knew that there was no procrastination and no going back for us, we sat down for two weeks straight to finish composing with total commitment. We’re perfectly happy with the outcome – I’d even say that “Abra Kadavar” comprises the best compositions we’ve created to date. The songs are more diversified, the ideas feel more spontaneous. Moreover, we’ve tried to capture much more of our live energy, which is why we’ve recorded almost everything all together in one room, with the amps turned up to the max – solely the vocals and a handful of guitar solos were added afterwards.” 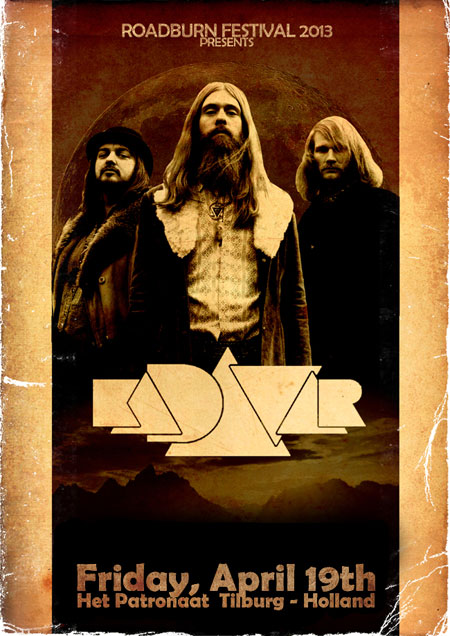 In related news,  Kadavar is confirmed for Roadburn Festival 2013 on Friday, April 19th at Het Patronaat in Tilburg, Holland.

Kadavar is currently gaining momentum as one of the hottest underground bands around. Their thunderous take on 70s psych, doom, prog and stoner rock goes far beyond mere Pentagram, Sir Lord Baltimore or Black Sabbath worship.

Of course there is a kinship with the aforementioned greats, and it would be easy to mistake Kadavar‘s recently released and impressive self-titled debut album with a long-lost, heavily sought-after relic unearthed from a charnel vault. But there’s more than just a visceral communion with the riff going on here.

The screech and wail of distorted guitars, heavy blues rock shouting, and grit-laden clouds of twisted soul constitute the real reason to immerse yourself in Kadavar’s chugging yet soaring and distorted psychedelica. The band’s immediate power and conviction will transport you to proto-metal oblivion!