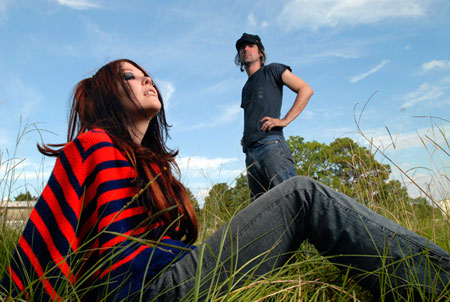 An aural tempest brews as the history of a land steeped in epic struggle, passion and beauty spews forth…a history informed by the rhythm of the grasses, the waters, the animals and the nomad tribes…a history of armies, great battles, many deaths, iconic leaders and the followers loyal…to the cause of a land that tempts all men with the powers of conquest and trade…wars innumerable fought through winters of unspeakable loss…generations of warriors, soldiers, citizens noble…bred from this soil nourished by blood…the land is the body and soul. Tsaritsyn, Stalingrad, Volgograd…Russia.

With their 7th full-length album, nomadic sludge deathdrone duo JUCIFER have channelled the soul/soil of a place called Volgograd into an hour and seventeen minutes of music as storied and powerful as the land and people to which they have dedicated this latest offering. Entitled ‘за волгой для нас земли нет‘ — “There Is No Land Beyond The Volga” – (a quote from a Russian soldier in the battle of Stalingrad) JUCIFER’s new concept album tells the history of Volgograd (formerly Stalingrad) from the perspective of its people, its soldiers, its children and the very land itself. 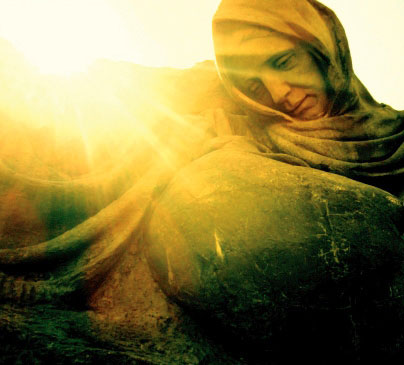 And the music: what else are we here for right? Musical S & M for the modern, corroded soul. Untouchable epithets of beauty…grim odes to all that’s heavy…some of the best songwriting to emerge in modern extreme/heavy music today. There’s Sleep, there’s the Melvins, and there’s JUCIFER. It’s that simple and strong. A hot oil bath of vicious riff after riff. Massive distortion soaked stoner sludge sabbath worship down-tuned skin curdling infectious head banging riffs beaten into submission by the unmistakable power hungry rhythm of Lucifer’s custom hard-hitting kit. A sludge-rock landscape imbued with the scars this history left on the band’s psyche… crusted with the yellow dust stirred by their feet as they walked Volgograd’s hallowed ground on a hot hungover post-show afternoon… a sonic land populated by harmonies of the damned, fuzzed-out blacktop solos and a turning of the screw as slow and painful as the Russian winters these arcane volume addicts are singing about.

If you’re only going to listen to one sludge-fuelled concept album about Stalingrad this year, make JUCIFER’s ‘за волгой для нас земли нет’ your go-to baby. It will not disappoint.

‘за волгой для нас земли нет‘ is set for release on the 17th July via Mutants Of The Monster & Nomadic Fortress, in the meantime, you can stream a video teaser for the album below.