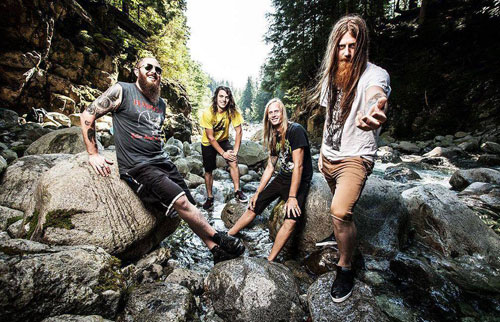 Vancouver quarter Anciients’ debut album Heart of Oak belies the relative youth of a band that have only been playing together since 2010.

The album follows on from the gloriously titled two-track EP Snakebeard. Tracks such as ‘Humanist’ are composed to near perfection and are delivered with frightening precision; seamlessly treading from intricate solos into thunderous and unrelenting riffs complemented by vocals which soar with angels one moment and snarl like dogs of war the next. Anciients are tapping into a forgotten vein of Viking fury and have created something so colossal it threatens to loosen the bowels of the underworld. Reminiscent of a Mastodon/High on Fire frankenbeast, coupled with shades of Opeth, this is progressive metal at its finest.

Battle hardened after a tour with Tesseract, as well as a show with London’s own Orange Goblin, Anciients are a band we’ll surely be raising a can of Red Stripe to at DesertFest London 2014.