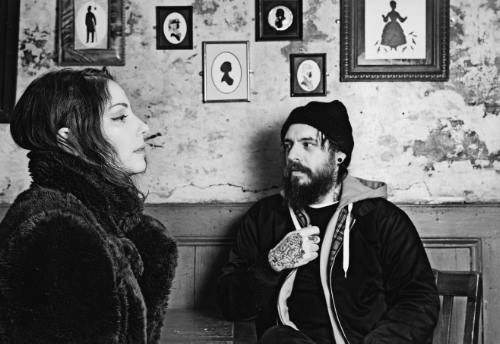 SE DELAN are a duo made up of Justin Greaves, the multi-instrumentalist leader of Crippled Black Phoenix, and Belinda Kordic on vocals, a Swedish singer who previously recorded as Killing Mood. Having recently signed to Kscope the duo can now count the likes of Engineers, North Atlantic Oscillation and Ulver as label mates.

Greaves initially came to prominence as drummer with seminal sludge metal act Iron Monkey and went on to form Crippled Black Phoenix in 2004. Crippled Black Phoenix has since been the sole focus of his musical output, recording seven albums, embarking on countless tours and working with a host of different artists.

SE DELAN‘s debut album The Fall, set for release on 14th April, feels distinct from anything Greaves has worked on before. At certain points on the record there are uplifting soundscapes, complemented by spacious moments of heaviness akin to the most recent of records by Dylan Carlson’s Earth.

Tracks on the album such as ‘The Hunt’ could be a nod back to the progressiveness of Crippled Black Phoenix but overall the music on ‘The Fall’ is the sound of a musician experimenting outside the constraints of his main band, while at times also stripping everything back for a more minimal and raw approach to song-writing.

The duo have shared the writing duties on the album, with Justin making the music and Belinda creating the words and vocals. The combination of shared influences (‘music, film and life’) and a mutual understanding of the way each other works has resulted in a beguiling and haunting album.

You can also stream the video for the track ‘Dirge‘ as a taster of the solemn sounds to come.