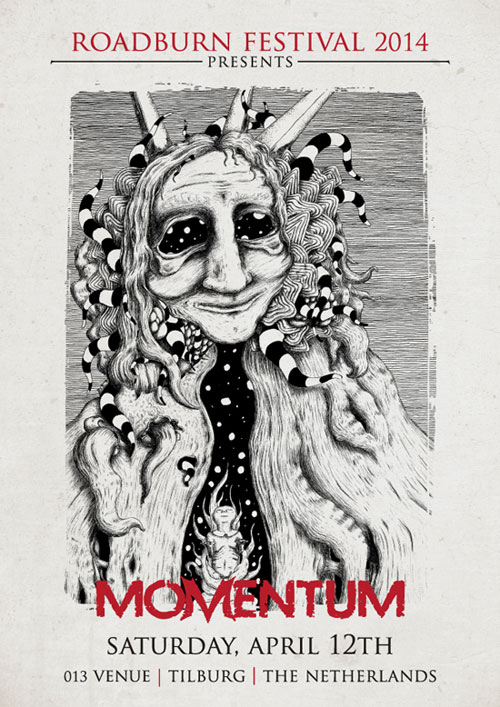 Despite the geographic isolation, Iceland is becoming more widely represented in the world wide metal scene of late. Solstafir has been making huge waves over the last couple of years with their atmospheric, angst-fuled post rock, with the band ranked among the highlights of Roadburn 2012. Now, another Icelandic avant-metal band is poised to escape their homeland’s endless white landscapes, glowering peaks, empty valleys and shrieking winds: Momentum, and we’re excited to report that the band has been confirmed for Roadburn Festival 2014 on Saturday, April 12th at the 013 venue in Tilburg, The Netherlands.

Originally started as an extreme black / death metal project in 2003, Momentum evolved to excel at blending tactful post-rock atmospheres, reminiscent of Isis and Cult of Luna, with a Neurosis-esque level of bone-crushing heaviness broken up by soft singing and relaxed clean passages, intense vocal layering over discordant, staccato bursts and sheets of additional eerie sound textures that explode into high-impact power chords.

The band’s latest album, Fixation, at Rest, is a jaw-dropping affair showcasing a band that pays serious attention to transitions and dynamics, one fundamentally underpinned by psychedelic phrasing, with a decidedly progressive bent to their songwriting approach and tight musicianship that pushes them towards a sound of their own — its the little twists and turns, the wide range of vocal stylings, and also their gift for somber yet intricate melodies that sets Momentum apart from their peers.

Be forewarned: Walter & Co have a confident suspicion that Momentum will rank among the unexpected highlights of Roadburn Festival 2014, as they are truly moving, just like those vast tectonic plates.