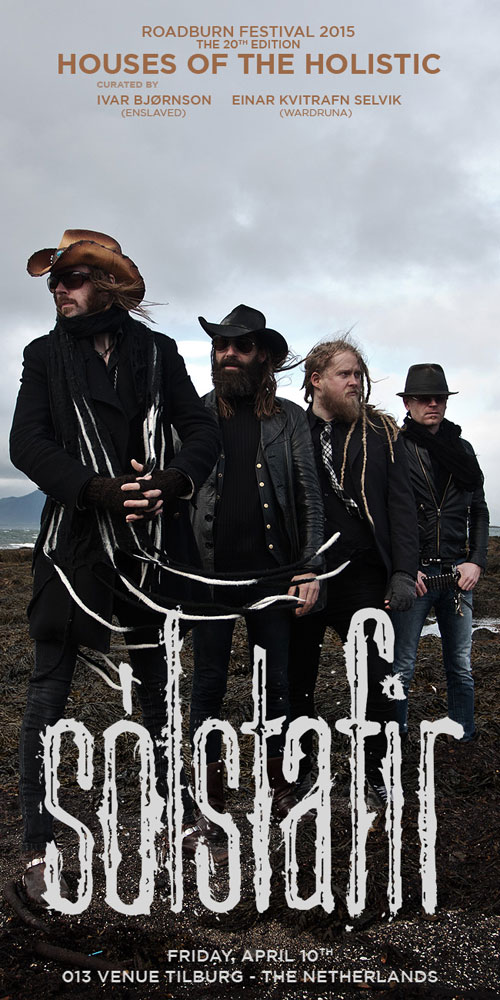 Walter & co are thriled to announce that Icelandic heathens Sólstafir have been confirmed for Houses Of The Holistic, Ivar Bjørnson‘s and Einar “Kvitrafn” Selvik‘s curated Roadburn event on Friday, April 10 at the 013 venue in Tilburg, The Netherlands.

“It seems to me that ever since Iceland became independent from Denmark in 1944 the musical environment on the island has constantly and fearlessly been searching for its own identity. This has ultimately resulted in the identity itself becoming an enormous density of innovative musicians and bands that constantly push and challenge the boundaries and norms of genres within music, as we know it.

With an expression shaped by Iceland´s harsh yet stunningly beautiful nature Sólstafir also balance and convey this perfectly through their sound and also brilliantly reflecting native culture through their visual concept and native tongue. I foresee a great future for this group and it´s an honor to have them in our line-up! ” — Einar “Kvitrafn” Selvik / Wardruna.

“I’d been hearing about these Icelanders looking and sounding like mythological geyser outlaws, but I really got them during the Barge to Hell metal cruise in 2012. They were playing the outdoor pool stage at 10 in the morning, and it will always remain one of my most unique and grandiose concert experiences. As it happens, they have a new album, ‘Ótta’, that is absolutely spectacular, so even though Roadburn isn’t on a ship, I am confident this will be equally epic!” — Ivar Bjørnson / Enslaved.

SIGIRIYA: New Track ‘Tribe Of The Old Oak’ Now Streaming At The Obelisk