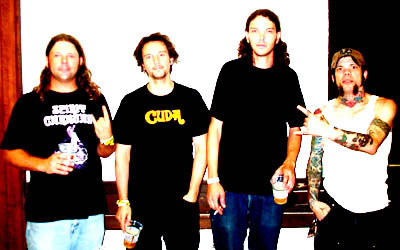 Stoner-Sludge band BONGZILLA’s back catalog is receiving the vinyl treatment through a licensing agreement with Relapse Records.  Underground boutique record label HYDRO-PHONIC RECORDS, who specializes in stoner, doom and sludge vinyl releases featuring unique packaging, has started with BONGZILLA’s “Gateway” on vinyl in time for the 10th Anniversary of the classic album. Following “Gateway” will be “Stash” and “Shake” LP’s, receiving their first ever vinyl treatments.

While BONGZILLA’s final release on RELAPSE RECORDS to date was 2005’s “Amerijuanican” (featuring “Dixie” Dave of Weedeater on bass) the band is currently on hiatus, they plan a future reunion at some point when all original members can participate.  Occasionally the members get together and jam under the moniker of Aquilonian, even producing a split CD a few years ago with sludge band Sollubi.

Hydro-Phonic Records pulled out all the stops on the Gateway 10th Anniversary Edition. With a standard version on green wax and an extra special limited “Black-Light” version on the first ever manufactured pink black-light glowing colored vinyl. Simply hold under any black-light and enjoy the unlimited psychedelic fun, unlike Glow-in-the-Dark vinyl that needs to be charged under lighting and lasts only a few minutes.  50 Deluxe Editions are also available with Black-Light vinyl, comic book, poster and numerous other extras for the die-hard collectors.

BONGZILLA’s “Stash” LP is scheduled for late 2012 and the “Shake:The Singles” 2xLP in the springtime and is rumored to feature a special hand-made pop-up book edition.