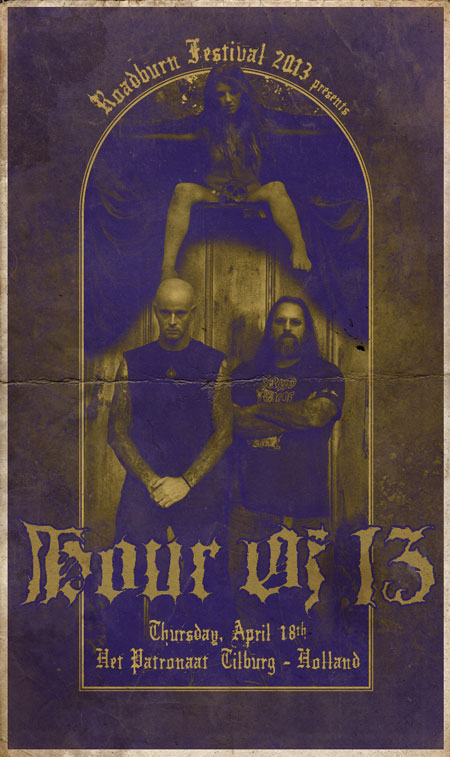 Roadburn are elated to announce that North Carolina doom metallers, HOUR OF 13, have been confirmed for Roadburn Festival 2013 on Thursday, April 18th at Het Patronaat in Tilburg, Holland.

“Hour Of 13 are extremely honored to be a part of Roadburn 2013, the most important music festival in existence today”, says Chad Davis, “We guarantee a spot-on performance of our brand of gloomy Heavy Metal. As an avid admirer of this festival, it brings me great pleasure to become a part of this festival’s legacy.”

Hailed by Darkthrone‘s Fenriz in his ‘Band of the Week’ blog, Hour of 13 offer an absolute master class in hard rocking heavy metal. They pair traditional doom with the spooky darkness of occult rock as showcased on their self-titled debut, 2010′s The Ritualist, and the band’s latest offering, 333, released through Earache Records earlier this year.

Powered by Chad Davies‘ majestic, devilish riff worship, and shrouded with occult themes and sentiment, Hour of 13 venture into the dark side, psychologically bringing up demons that aren’t entirely mythological; demonstrating that heavy metal might doesn’t have to feature anguished vokills to threaten to collapse under the weight of unwieldy despair or to be highly disturbing. It’s Phil Swanson‘s pained vocal intonation, underpinned by Davies‘ gifted songwriting skills and sonic wizardry that sets them apart from the current crop of denim vested wannabes.

If you are banging your head to the likes of Judas Priest, Manilla Road and Mercyful Fate, or even to contemporaries as In Solitude and The Devil’s Blood, you need to be down at the front. See you all there!

Roadburn Festival 2013 will run for four days from Thursday, April 18th to Sunday, April 21st, 2013 (the traditional Afterburner event) at the 013 venue and Het Patronaat in Tilburg, Holland.