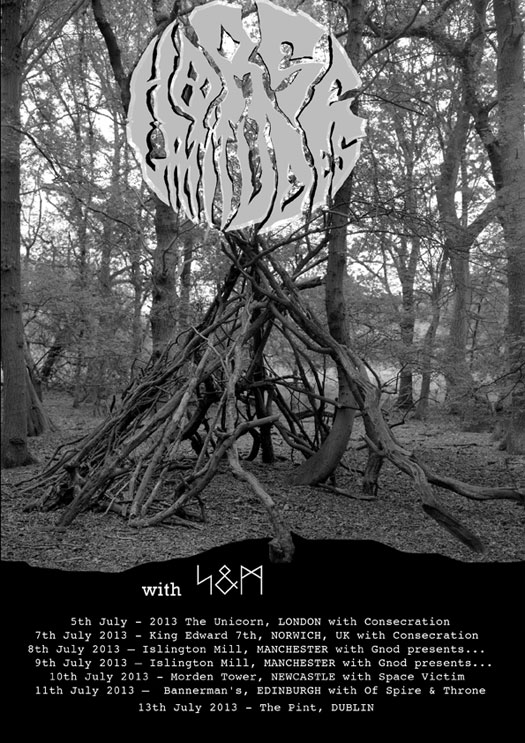 Armed with 2 bass guitars and a drum kit, the doom trio HORSE LATITUDES will be hitting the UK during July for a string of dates which also takes in the GNOD Presents 2 Day extravaganza at the Islington Mill in Salford. Support on all dates comes from S&M and the full tour schedule is as follows:

Read on for more info about the bands…

HORSE LATITUDES was formed in 2009 by three individuals with the collective vision of playing slow, primitive and powerful music with two bass guitars and ritual drums. Hard to fit into just one genre, the band is influenced by doom metal, black metal, sludge and punk among others and has been compared to unique acts such as Winter, Hellhammer, Amebix, Beherit and Urfaust. One of the distinct features that set Horse Latitudes apart from most of the slow-and-heavy genre is the prominent use of clean singing, reminiscent of traditional doom metal of the old days.

The lyrical side of HORSE LATITUDES deals with the ambivalence of being a human both inside and outside the natural world, through symbolical and mythical representations and subjective explorations into one’s personal experience. That includes frustration towards the incompleteness of man-made concepts in light of the nature of the indescribable and uncontrollable non-human world, but also awareness of the potential of awakening through spiritual openness.

The new HORSE LATITUDES record called Black Soil will be released as 12” and cassette tape on Doomentia Records in June 2013 to coincide the UK/Ireland tour in July.

S&M (formely known as Sunday Mourning) is the core combo of Sanna Charles and Mark Wagner. They changed their name in 2012 to mark a rebirth, multiplying different philosophies, creative approaches, formats and collaborations. The duo also play in Black Abba (with Alexander Tucker and Olly Pearson of Moss), The Tine Tone Army (with members of Dethscalator, Penthouse, Bag Guys, Lydia Lunch etc,) and the Moonn o))) collective with whom they created a multi-faceted performance for the 2012 Supersonic festival. S&M play a unique blend of ritualistic folk, tribal doom and unearthly soundscapes. Their album Sunday Mourning is out on Skeletal Beach.