California doom rock powerhouse HIGH ON FIRE will release not one, but two LIVE albums on June 18 via eOne.  Titled Spitting Fire Live, the two volume set represents the first official live documents of the power trio’s storied career, perfectly capturing the sound and intensity of a band whose performances have been hailed as “rumbling and down-tuned and resonant” by the New York Times and who the Chicago Tribune called “one the best live bands you will ever see.”

Recorded over a two evening NYC headlining stint at both NYC’s Bowery Ballroom and Brooklyn’s Music Hall of Williamsburg last winter, Spitting Fire Live showcases HIGH ON FIRE at its incendiary best. The live sets contain well known HIGH ON FIRE songs from each of the band’s critically acclaimed studio albums including last year’s celebrated De Vermis Mysteriis. Mixing of the performances was handled by Greg Wilkinson with additional engineering done by Converge’s Kurt Ballou. The albums are available for pre-order via iTunes HEREand HERE, while limited LP versions and special bundle packages can be pre-ordered HERE.

The release of HIGH ON FIRE‘s Spitting Fire Live  puts a triumphant cap on a multi-year run by the Oakland band that has been fraught with both celebration and frustration. The release of last year’s De Vermis Mysteriis followed more than a year and a half of world touring in support of 2010′s Snakes for the Divine which included multiple North American headlining jaunts, international festival appearances and tours alongside Metallica, Slayer, Mastodon and The Melvins, the latter of which saw the trio caught in BOTH the February 22, 2011 6.3 magnitude earthquake in Christchurch, New Zealand and the powerful earthquake and resulting tsunami in Tokyo, Japan on March 11, 2011. The group was unharmed, but shaken after surviving its second natural disaster in sixteen days and was able to return to its native Oakland a few days later.

Last summer, HIGH ON FIRE was forced to pull out of the Rockstar Energy Drink Mayhem Festival as front man and guitarist Matt Pike entered treatment for alcohol rehabilitation.  Pike would emerge from treatment “stronger than ever” and HIGH ON FIRE celebrated by releasing “the wildest video in heavy metal history” for De Vermis Mysteriis‘ potent track “Fertile Green” (below) and then immediately announcing a North American headlining tour which saw the band at its very best and would ultimately yield the recordings that would become Spitting Fire Live.

With a renewed energy, drive and passion for the unique music it creates, HIGH ON FIRE forges forth as focused and determined as ever before. Spitting Fire Live showcases the dedication, resolve and ultimate creativity of one of the very finest metal bands on the planet today. 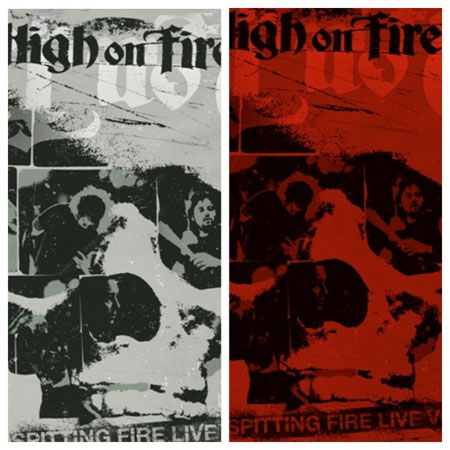