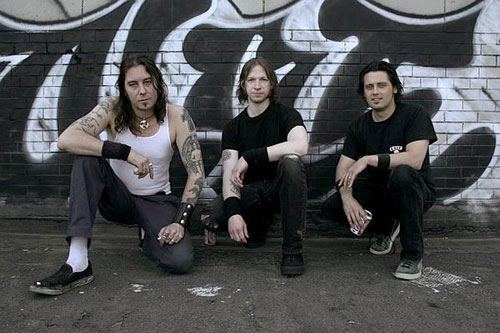 California rock giants HIGH ON FIRE have begun work on their new, as-yet-untitled studio album. The globally-celebrated group — guitarist/vocalist Matt Pike, drummer Des Kensel and bassist Jeff Matz – have convened for strategic writing sessions in both New Orleans, LA and Oakland, CA, with early reports indicating the band’s new material to be both “epic” and “sonically huge”. A winter 2015 tentative release date via eOne is expected for the new LP, the follow-up to 2012′s De Vermis Mysteriis, which has been hailed as “not for the faint of heart” by The New Yorker and “a fantastically constructed bloodbath” by Entertainment Weekly.

“Des, Jeff and I are really getting creative and writing a hell of a new record,” states Pike. “It’s a crazy project and I can’t really explain what it’s all about just yet, but we’ve been writing a lot of crazy intense material that will up the ante, and bring things to another level.”

“Everyone is asking what the new High on Fire music sounds like,” adds Kensel. “Chew on some mescaline and listen to side B of Sabbath’s “Master of Reality” backwards at 78 RPM and it might give you an idea.”

In addition to constructing the new album, HIGH ON FIRE has announced a handful of upcoming US live dates as well as an Australian headlining tour and a European headlining trek. The Land of Oz trek will launch on July 16 in Brisbane and the Euro jaunt will kick off on July 23 in Germany and run through August 9 in London, England.

Previous to the out-of-country dates, HIGH ON FIRE will undertake a Chicago area residency that will begin on May 29 in Rock Island, IL. The band will then gig as one of the headliners of the Do-Division Street Fest on May 30 (w/ J Mascis, Bass Drum of Death, etc.) before back-to-back headlining shows at Chi-Town’s Empty Bottle on May 31 and June 1.

HIGH ON FIRE tour dates are as follows:

CORROSION OF CONFORMITY Take Break From New Album; Live Dates In The US & South America Announced