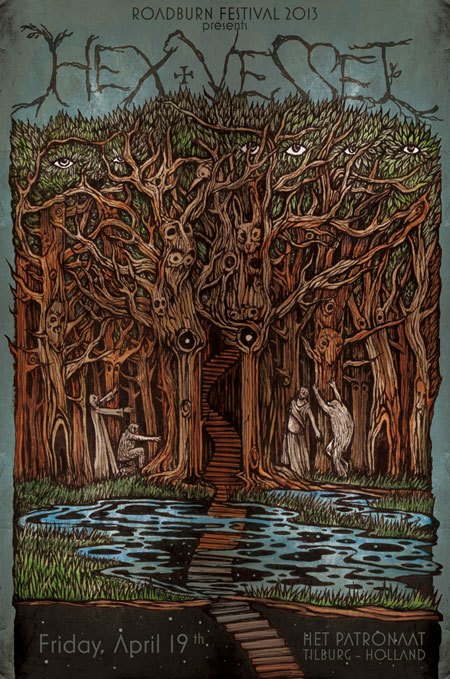 Last Roadburn Festival, Finland’s nature-mystics, Hexvessel, had been garnering rave reviews from the media and fans alike with their debut album Dawnbearer. One of the biggest revelations of the festival, they hinted towards a sound from their forthcoming second album that both surprised and excited the audience.

It was that September-released follow-up album, No Holier Temple, which fuses the acoustic 70s folk vibe of its predecessor into a more psychedelic, doom-folk sound, juxtaposed with deep ecology, like the thinking man’s acid-rock, that has caused a real stir and gave rise to the idea that we just might need to invite them back to Roadburn 2013.

Reaching what Metal Hammer Magazine describes as “portals” of “spirit-trafficking menace” and “moments of transcendent beauty,” About.com calls their new album “a cult-born liturgy for all who appreciate nature’s splendor.” With Rock-A-Rolla Magazine dubbing it “an ever-shifting beast, floating between unhurried bliss and fevered rapture.”

Prog Magazine identifies it containing nods towards “the Beatles, HP Lovecraft and King Crimson,” whilst reminding that they have created “their own world, both whimsical yet also biting.” Soundi Magazine, from their Finnish homeland, even calls the band “the Black Sabbath of this decade.”

Walter & Co are all extremely happy to welcome back, as Ondarock from Italy puts it, “the rising stars of psychedelic folk in Europe,” as their European tour with fellow label cohorts Sabbath Assembly, reaches it’s climax at Roadburn Festival 2013 on Friday, April 19th at Het Patronaat in Tilburg, Holland.