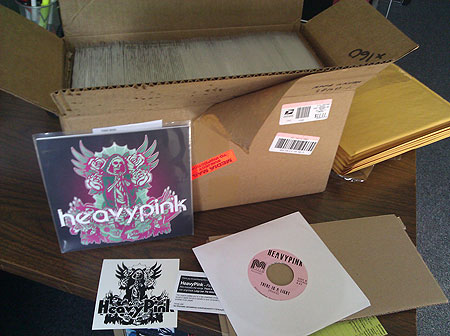 The Maple Forum is thrilled be releasing the self-titled debut 7” from HeavyPink, the latest project of T. Dallas Reed (Stone Axe, Mos Generator). The vinyl single is limited to 300 and features two brand new cuts, “Flower and Song” and “There is a Light,” exploring a rarely-heard psychedelic side of the Port Orchard, Washington, native’s songwriting.

Reed, who is notoriously DIY, played all the instruments on HeavyPink, sang himself, and recorded the material at his own HeavyHead studio. Fans of Stone Axe will be thrilled to discover that although he is working in a different style, the signature elements of Reed’s work remain intact, most pivotally that there’s zero bullshit involved.

He explains the project’s origins thusly: “Before Mos Generator took our hiatus in 2009 we were working on an album to be called HeavyPink. When the band shelved the project I decided to pick up the concept and use it as a tool to try different recording and writing techniques. I look at it as an experiment in heavy and beautiful music, like ‘Master of Reality’ meets ‘Pet Sounds,’ meets ‘Into the Pandemonium’ all in one and produced by Phil Spector.”

Buy your copy now direct from The Maple Forum HERE.