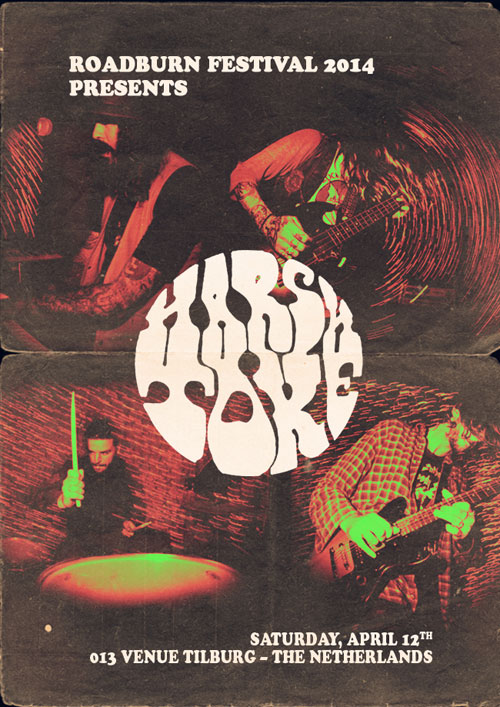 Skateboards, palm trees, psychedelic bands: these are enduring iconic symbols of California. Whether it’s pavement or guitars, the state has a rich and colorful history when it comes to shredding. Ready for the next chapter? Meet San Diego’s Harsh Toke!

Emerging from the same scene as Earthless, these four dudes share the mighty trio’s predilection for non-stop guitar-heavy psych rock awesomeness. They even have a professional skater in their ranks, too. Justin “Figgy” Figueroa’s searing guitar is alive with reverb and delay, climbing the wall of sound like some fast-growing new hallucinogenic strain of bougainvillea.

Meanwhile, Richie Belton’s grooving bass line dives into the rip current of Austin “Buya” Ayub’s smashing drums as Gabe Messer (“I’m on the space key,” he said by way of introduction in a video interview with Front magazine) sends one wave after another into the mix.

Tee Pee Records took notice and released the band’s invigorating debut full-length, Light Up and Live, which not only put Harsh Toke in excellent company label-wise but also earned them a spot on many Best Of 2013 lists. Recorded by Astra’s Brian Ellis and mastered by Carl Saff (Earthless, OFF!, Unsane), you might also recall that Light Up and Live was Roadburn’s Album of the Day on Friday, November 1st.

So far, US audiences have had a chance to trip out on some captivating Harsh Toke gigs. This year will be Europe’s turn. One of the enduring hallmarks of the Roadburn Festival is the incredible instrumental magic that happens on stage — Earthless in 2008 and Heavy Jam in 2012 are just two stellar examples. With that in mind, we are ultra stoked to offer Harsh Toke a residency to play their first-ever European shows exclusively at Roadburn Festival 2014 on Saturday, April 12th and Sunday, April 13th (the traditional afterburner event) at the 013 venue in Tilburg, The Netherlands.

Traditionally, Roadburn audiences have shown a voracious appetite for high grade spaced out jams. Harsh Toke promises to deliver a cosmic buffet that will satisfy. Get ready to feast on some very tasty sounds!