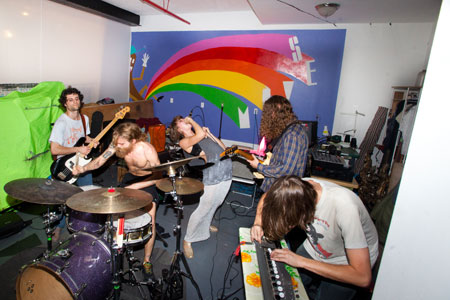 The 6 minute soundscape is a snippet from their new album ‘See the World Given To A One Love Entity‘ which is just one 40 minute track that takes you on a roller-coaster ride of musical emotions while the video was conceived and edited by the band’s very own Greg Fox (Dan Deacon, Teeth Mountain, Liturgy). Matt Marlin (Pterodactyl, Starring) directed and also co-edited the video.

In a statement the band cites Christopher Walken’s performance in 1989 film Communion, as well as multimedia storyteller Aeolus Kephas, and author Robert Anton Wilson as an influence for the video.

The debut album “See the World Given to a One Love Entity“ is OUT NOW via Thrill Jockey.