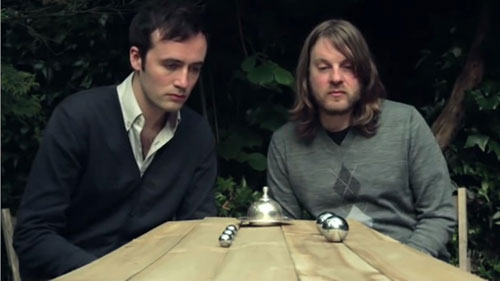 With the new album ‘Glynnaestra’ out later this month, Grumbling Fur have released a video for the track ‘The Ballard of Roy Batty’ taken from it, a song in reference to the final dying words of main antagonist in the cult sci-fi film Blade Runner (oh yes!).

As veterans of the UK experimental underground, Daniel O’Sullivan and Alexander Tucker are long time friends and collaborators. O’Sullivan as a member of Guapo, Ulver, and Æthenor (with Stephen O’Malley), and Tucker with imbogodom and as an eclectic (read: Yeti) solo artist. GRUMBLING FUR’s world is an innovative one, where every sound contains its own unique story, and is driven by the overarching melody and harmony. O’Sullivan and Tucker write pop songs for the sophisticated palate.

GRUMBLING FUR will be performing at East End Live on Saturday 13th July at the Red Gallery. The festival will take place across 10 venues with 50 bands playing including Pere Ubu, Toy, East India Youth, Wet Nuns and more. They will also be doing a free in-store at Rough Trade East on the day of the album’s release on Monday 22nd July. Rough Trade will have an exclusive tote bag free with all purchases of the album. The bag comes in black and features an original design by the duo.