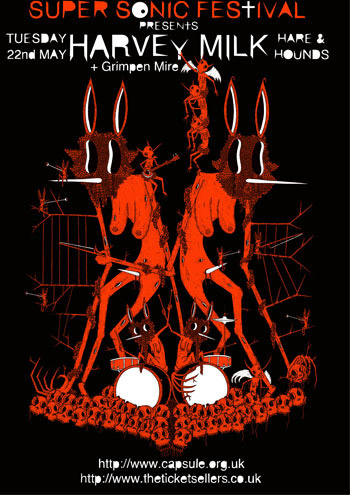 Capsule coaxed Harvey Milk to make their first UK appearance at Supersonic Festival in 2008 and are now thrilled to have them back, the gig takes place on Tuesday 22nd May 2012 at Hare & Hounds, Birmingham, tickets are £10 and are available from www.ticketsellers.co.uk & a Facebook Event has been set up HERE.

A bit more info about the bands….

Harvey Milk are an American experimental rock/noise rock band that formed in Athens, Georgia in the early 1990s. While Harvey Milk invariably draws comparisons to the Melvins, due to their penchant for slow, heavy riffs, the band has touched upon such artists as ZZ Top, Led Zeppelin, Leonard Cohen, and Kiss as influences in their music.

Einstellung are a krautrock/shoegaze band from Birmingham. Einstellung’s work has been likened to My Bloody Valentine Bardo Pond and Neu!. They released a double vinyl names ‘Wings of Desire’ on Capsule’s very own record label.

Grimpen Mire effortlessly combine traditional Doom by the likes of Sabbath with the aggressiveness of sludge and hardcore, West Midlands trio Grimpen Mire have continued to lay waste to venues since their inception in late 2007. The blend of textured guitars and unrelenting heaviness has seen them rapidly rising the ranks of the UK doom scene, their debut album is due out in 2012 on At War With False Noise.