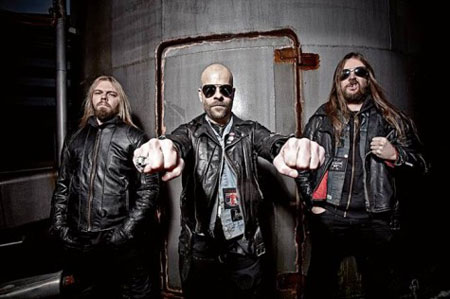 Swedish rockers GRAND MAGUS have inked a deal with Nuclear Blast Records. The band’s new album, “The Hunt”, will be released at the end of May.

Commented GRAND MAGUS frontman Janne “J.B.” Christoffersson: “GRAND MAGUS have finally found their hailing port — we’ve wrapped up a deal with the mighty heavy metal label Nuclear Blast. By this, a new chapter will be opened, both in our band and in metal history. With ‘The Hunt’ we will consequently keep on marching down the metallic path we’ve started to pursue over the course of the past years. Be prepared to be lined up in our sights from the end of May on, when ‘The Hunt’ will strike! Fuck the world!”

Added Nuclear Blast label manager Andy Siry: “We’re delighted to welcome GRAND MAGUS to the Nuclear Blast family. These guys class among the best today’s heavy metal scene has to offer, though GRAND MAGUS are much more than just that. Both live and on their albums, GRAND MAGUS are terrific, plus they indicate a continuous development. This is why we’re happy to turn over a new leaf in the history of band and label.”

GRAND MAGUS‘s last album, “Hammer Of The North”, was released digitally in North America in January 2011 via Roadrunner Records. The CD was recorded at 301 studios outside of Stockholm and features artwork by Necrolord.

During the band’s 10-year history, GRAND MAGUS released two demos, one split EP and five full-length albums, and has received overwhelmingly positive reviews throughout. Their fourth opus, “Iron Will”, was voted “Album of The Month” in the German Metal Hammer and Rock Hard magazines.

Drawing hefty influences from the hand-on-heart grandeur of the NWOBHM and the inspirational mythology of their forbears, GRAND MAGUS is steeped in pre-Christian tales of triumph, vengeance, betrayal, wisdom and death. But GRAND MAGUS also stands for energetic live performances, as seen at European festivals such as Sweden Rock, Hellfest, Wacken, Summer Breeze and on tour in Europe with bands like AT THE GATES, CATHEDRAL, CANDLEMASS, TYRANT, SERPENTCULT and ELECTRIC WIZARD.