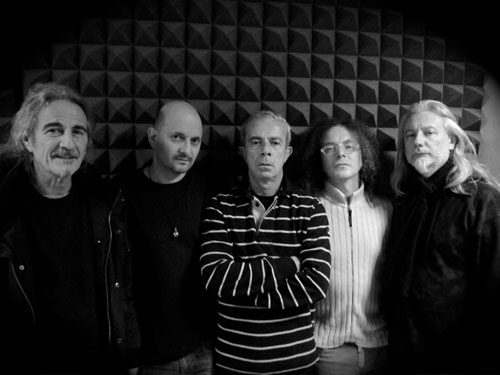 Relapse Records is extremely proud to announce the signing of Italian progressive instrumentalists GOBLIN REBIRTH. A new incarnation, inspired by the legendary Goblin, the 1970’s horror-synth / film score icons responsible for such soundtracks as Suspiria, Zombi and Tenebre, GOBLIN REBIRTH came together after a short-lived reformation of the original group in 2009. The new group contains the famed rhythm section of the original Goblin (drummer Agostino Marangolo and bassist Fabio Pignatelli, who both played on the classic soundtracks to Zombi/Dawn of the Dead, Suspria, Profondo Rosso/Deep Red and more), with the addition of Aidan Zammit and Danilo Cherni on keyboards and Giacomo Anselmi on guitar.

The band formed in 2010 and started with a live repertoire of Goblin hits and some unusual songs from more obscure Goblin soundtracks. The band members soon began creating new material and decided to look to the future, creating songs that grew out of an organic process, through a combination of individual compositions and jam sessions.

Now the first new recordings from GOBLIN REBIRTH will see the light of day via Relapse Records in the Spring of 2015. The group’s debut album was mixed and produced by Fabio Pignatelli, and recorded in Rome at Greta’s Sound, Zamusic Studios and Cherni Studio. The drums were recorded in Trani by Ciccio “Frums” Dettole at Scuola Sul Mare. The album was mastered by Bob Fix at BobFixMastering.

The group commented on the new material:

“It was clear to us from the start that we wanted to do an album that in some way evolved from the original Goblin sound but also took a new direction reflecting the personalities of all the band members. The pieces all fell together to make up a story that loosely describes the destruction and rebirth of a strange creature. This is itself a loose metaphor referring to the band history.”

Stay tuned for more news on GOBLIN REBIRTH including release dates and song samples from their upcoming album along with tour dates and more!

Live footage of GOBLIN REBIRTH in Rome can be seen below with additional rehearsal footage of Killer On The Train and Witch.