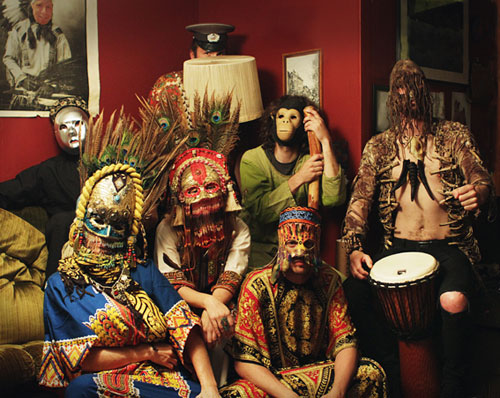 GOAT‘s Commune is the Swedish collectives critically acclaimed follow up to 2012’s World Music. It has become their first UK Top 40 Album and a Billboard Top 200 albums chart debut. Now it has spawned their first ever official video.

Hide From The Sun was directed by Sam Macon (Dum Dum Girls “Bedroom Eyes”) and features artwork from Stacey Rozich (character illustrations in Fleet Foxes “The Shrine / An Argument”). Sam and Stacey collaborated closely to create a dark, psychedelic, mythical trip across three distinct worlds. As Sam states, “It isn’t a story set in the past, nor is it a story set in the present or future. It simply exists in its own realm“.

Now stream the psychedelic trip that is Hide From The Sun below:

The hypnotic World Music introduced us to the mysterious, masked music of GOAT. They have awed the world since with their intense, ritualistic live shows, playing festivals such as Glastonbury, Coachella, SXSW, Latitude, Incubate, Liverpool Psych Fest and a recent sell-out European tour. This has continued with the release of Commune, and now Hide From The Sun gives us even more insight into the world that is GOAT.

Commune is out now on CD/LP/DL via Rocket Recordings (Stranded Rekords in Scandinavia and Sub Pop Records in North America) and as Dave championed in his review “Commune is still a wholly immersive experience, exciting and vivacious, and it reflects an ideal that music is a true force of nature, a cosmic element capable of great good and transcending time and nation“, with that said, you really need to be adding Commune to your collection!