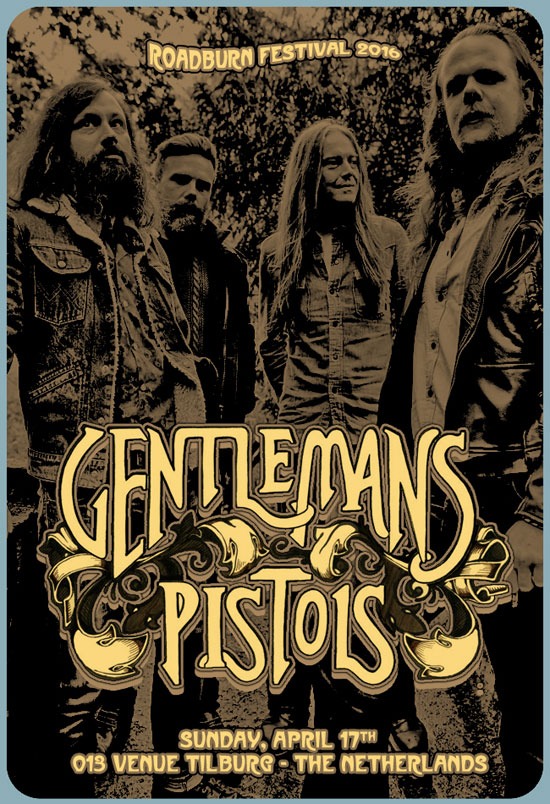 Gentlemans Pistols bring with them the promise of a good old fashioned Yorkshire knees up; a party long into the night, with the drink free-flowing and the riffs a-plenty. The raucous four piece have been packing out sweaty venues around Europe for years now, honing their rock’n’roll swagger into a not-to-be-missed, electrifying live performance.

Following on from their latest critically acclaimed album, 2011‘s At Her Majesty’s Pleasure, Gentlemans Pistols will be releasing their new opus Hustler’s Row via Nuclear Blast next month. A record that set out to be, according to singer / guitarist, James Atkinson, “one that was heavy but melodic, intense but catchy, thoughtful but unruly. A record for reprobates and romantics, for gentlemen and hustlers.ˮ

Of their Roadburn appearance, he says  “It’s an honour to be invited to play at Roadburn. We first played at the festival in 2008 following the release of our debut album the previous year, and we were humbled by the crowd’s response to our set. Armed with songs from new album, Hustler’s Row, we’re excited to make our return to the Roadburn stage in 2016.”

Walter & co are thrilled to have the retro-infused four piece bring their melodic grooves to Roadburn, on Sunday April 17, 2016. Gentlemen, hustlers – and everybody in between – are more than welcome.

We here at Shaman HQ love a good split EP, and although not as prominent as they once were, they