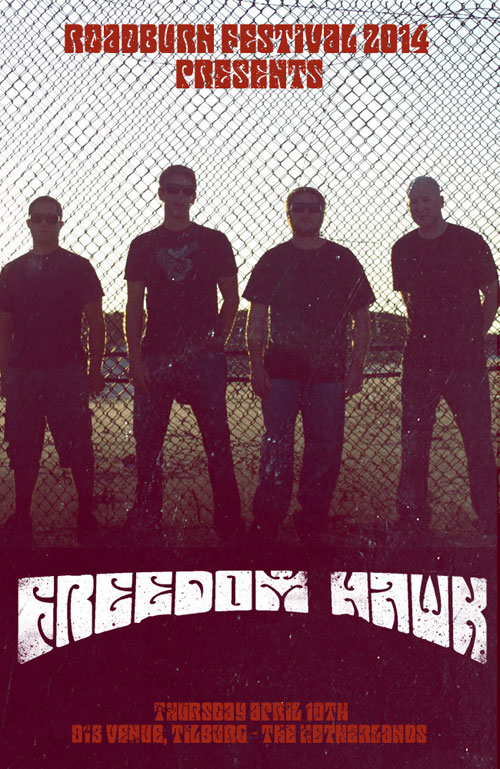 For all the crushing dark and avant-garde music that is adored at Roadburn HQ, they will always have a soft spot for good old fashioned high quality stoner rock. Consequently, they are positively ecstatic to announce that Freedom Hawk will bring their harmonious Sabbath-inspired grooves to Roadburn Festival 2014 on Thursday, April 10th at the 013 venue in Tilburg, The Netherlands.

Hailing from the barrier dunes of Virginia, Freedom Hawk has been described as the East Coast’s answer to Fu Manchu when it comes to keeping it simple and thick. The band’s massive sun-drenched riffs, wild shredding leads and pounding drums are totally rocking. And then there are the utterly irresistible wailing Ozzy-like vocals. If only Ozzy himself would soar like this on Sabbath’s 13!

Forget the Parental Advisory Explicit Lyrics warning; Freedom Hawk records should come with a sticker that says: “Caution! Contents may induce spontaneous air guitar heroics!” Not to mention the sudden urge to commandeer a dune buggy and start drag racing…

Speaking of records: the band’s latest album, Holding On, released via Small Stone Records, purveyors of the finest riff rock around, is easily one of the best pure stoner rock LPs from the last couple of years. Freedom Hawk’s catchy songs are seriously badass, ranging from galloping blasts of hook and heavy hard rock to smoldering stoner dirges. Is that Freedom Hawk? TURN IT UP, MAN! Roadburn is ready for their brand of beach party at Roadburn Festival 2014.