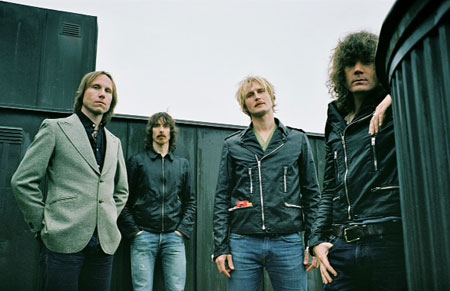 DESERTFEST Berlin are very pleased to announce that retro-rock band FREE FALL have been added to the 2013 line-up!!

From Stockholm, Sweden, FREE FALL was formed in 2009 by guitarist Mattias Bärjed (The Soundtrack Of Our Lives) who felt the urge to form a classic 4-piece band playing a straight up heavy rock ‘n roll. He was joined by long time friend and bass wizard Jan Martens, drummer Ludwig Dahlberg (International Noise Conspiracy) and lead vocalist Kim Fransson.

Sweden really seems to be the current spiritual home of the ongoing Retro-Rock revival, and FREE FALL don’t need occult lyrics, don’t need LSD driven imagery to convince any fan of 70’s music. The band let their tunes speak for themselves. Together, they have formed something that swings hard with an energetic, authoritarian and powerful sound they called “Freedom Rock”. A huge slice of grooving rock that is very much inspired by the greats of the 70’s.

After signing a deal with Nuclear Blast in October 2012, the band recorded their debut album “Power and Volume”, which was unleashed all over Europe few days ago ! Last Friday, they have also been confirmed to be touring Europe in April/May alongside fellow Nuclear Blast label mates WITCHCRAFT and ORCHID. As they both take part in DESERFEST Berlin, it was logic for us to also welcome FREE FALL, and help them to succeed their “quest to liberate people through Freedom Rock” !

THE BODY Preaches End-Time Sermon Through New Hymn At Pitchfork