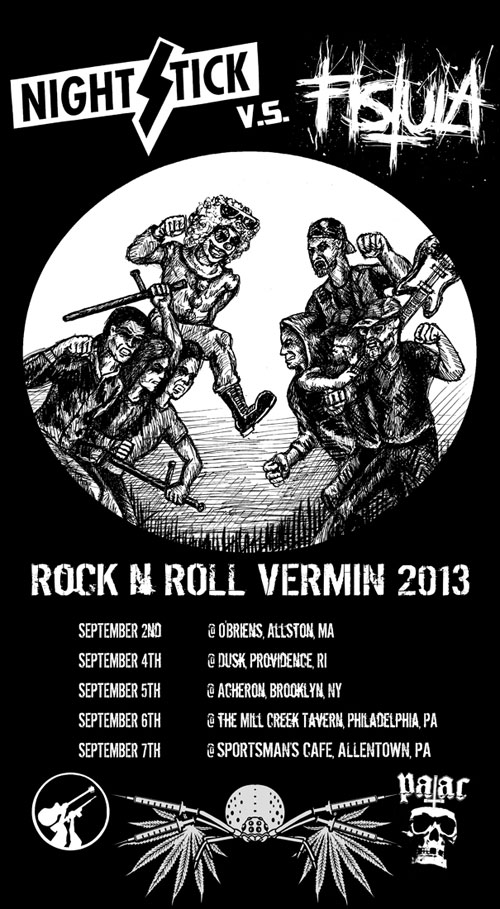 Long-running Cleveland ministers of sludge FISTULA are preparing to spread their aural disease along the East Coast with a short stretch of live assaults. Scheduled to commence on Monday September 2, the Rock ‘N’ Roll Vermin Tour 2013 will filthify its way through Allston Providence, Brooklyn, Philadelphia and Allentown. FISTULA will be joined by their diseased brethren, NIGHTSTICK. Hearing will be damaged. Feelings will be hurt.

In other FISTULA activities, the band has a host of resinated new offerings on the rise including the brand new Vermin Prolificus LP set to detonate via To Live A Lie early next year. FISTULA will be crash-test driving the tunes “Smoke Cat Hair and Toe Nails”, “Pig Funeral” and “Goat Brothel” throughout next week’s live takeover. Additionally, FISTULA will appear on a split cassette with Radiation Sickness to be unleashed through Die Song this October as well as a split 12” with Raven’s Creed through Doomentia in 2014. Finally, the band will be featured on the forthcoming release from XXX-rated funk legend BLOWFLY. Dubbed Black in the Sack, the eight track offering marks BLOWFLY’s first studio album in seven years and includes a curious collaboration with team FISTULA, Dave Szulkin (Blood Farmers) and Tesco Vee (The Meatmen) on the track “Dick Stabbath.” Black in the Sack will see release via PATAC Records this Fall.

Sully your ears to the sounds of “An Eighth of Meth Scabs” (from the Radiation Sickness split) and “Dick Stabbath” (from the BLOWFLY full-length) below.

Stay tuned for further FISTULA dealings to be divulged in the coming weeks.