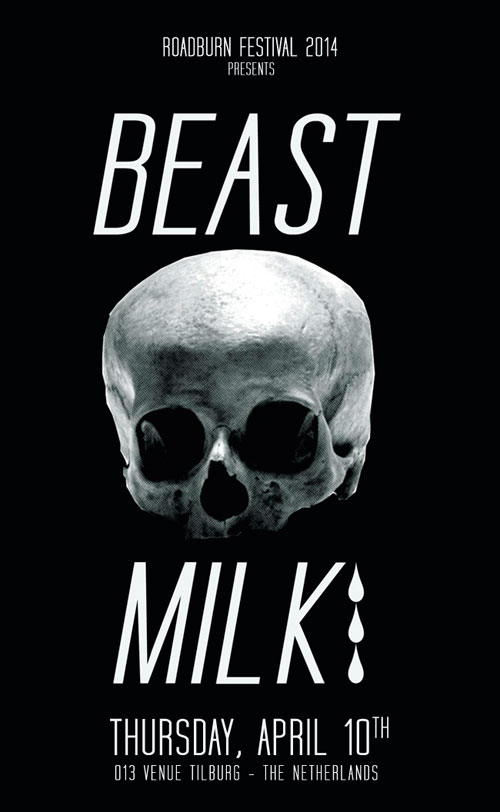 If there’s one thing that Walter & Co at Roadburn know as well as anyone else in the wide world of metal, it’s that when Darkthrone‘s Fenriz nominates a band for his legendary ‘Band Of The Week’ slot, you damn well better be paying attention. This is a man who hears more music than anyone – even our main men Walter and Jurgen! – and you only have to look at his past picks to know he has impeccable taste.

The man cherrypicked Beastmilk back in 2010 based upon the strength of their demo recording White Stains On Black Tape, and confused many a hardened metalhead with his choice of a decidedly non-metal murky post-punk sounding band.

Lead by Hexvessel vocalist and main man Mat ‘Kvohst’ McNerney, Finland’s Beastmilk couldn’t be further away from the acoustic freak-folk sounds of Hexvessel – who have graced the Roadburn stages twice in recent years – purveying, as they do, a peculiar form of darkly throbbing ice-cold post-punk gothic desolation.

Possessed of the driving cavernous bass of Joy Division or Samhain, the pounding thwack of prime Jesus and Mary Chain, the razor-slashing reverb-drenched icepick guitar of early Misfits and the oblique strangeness and angular rock ‘n’ roll of Roky Erickson, topped off with Kvohst‘s Robert Smith-esque vocal, Beastmilk will chill you to the bone and make those bones dance.

The band will be releasing their debut album, the naughtily-titled Climax, at the end of this year through Svart Records – following the afore-mentioned long sold-out demo and an equally long-gone 7″ Use Your Deluge – which gives you plenty of time to get their driving gothic angularity buried deep into your heads before they hit the stage at Roadburn Festival 2014.

Beastmilk will play on Thursday, April 10th at the 013 venue in Tilburg, The Netherlands. In collaboration with Finland’s Blow Up That Gramophone, we’re proud to have them and we hope they don’t leave you too cold.