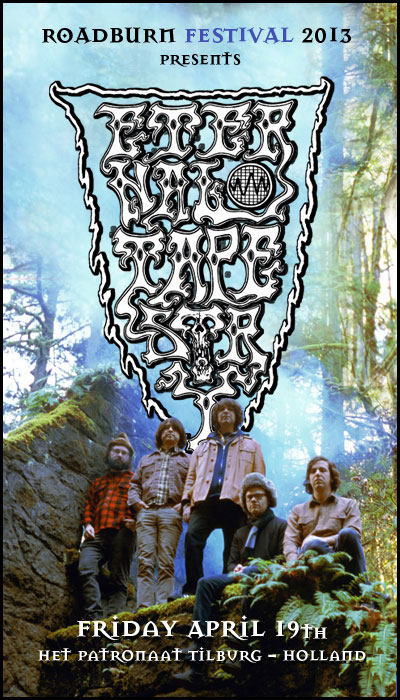 As well as announcing that HOUR Of 13 will be playing next year’s Roadburn, Walter & Co are also pleased to announce that acid-psych-rockers ETERNAL TAPESTRY will also be performing at the 2013 Roadburn Festival on Friday, April 19th, also at Het Patronaat in Tilburg, Holland.

In their 7th year of existence, and hailing from the pacific northwest in the US, Eternal Tapestry‘s members can also be found playing in Jackie-O Motherfucker and Heavy Winged (among other groups). With a lineup including a saxophone player, the band’s instrumental songs range in sound from circa ’71 Grateful Dead jams to Space Ritual-era Hawkwind to all-out raging psych rock assaults. Professing an equal love for Neu! and Sonny Sharrock, their twin guitar sound ranges from blissful to blistering and their free-improv approach to psychedelic rock is an absolute perfect fit for the festival!

Roadburn Festival 2013 will run for four days from Thursday, April 18th to Sunday, April 21st, 2013 (the traditional Afterburner event) at the 013 venue and Het Patronaat in Tilburg, Holland.