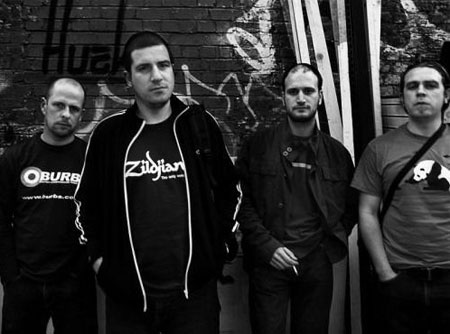 Veterans of 20 years by now, Canvey Island’s Whoremoan have been kicking out the jams since 1992 and working hard at it ever since. Having released a series of EPs and LPs, they keep the DIY punk ethic alive and stick it to the man by recording, producing and selling it all themselves. An ideal gig for Whoremoan drummer Simon Foote is one where “we have played well and there are people there who appreciate what we are doing and show that they are enjoying it.”

You’ll enjoy it OK……what they deliver live is the noise-rock, violence-above-all-else approach; Here’s a riff, we like it, you’ll love it, and we’re gonna hammer it home until it’s ingrained in your DNA.

If you dig the relentless concrete-block barrage of bands like Helmet, a side-order of stoner groove and even a shot of Clutch-lovin’ southern rock, these guys will be just the ticket to a sore neck, a few whoremoans no doubt, and a delierously good time at Desertfest 2013!