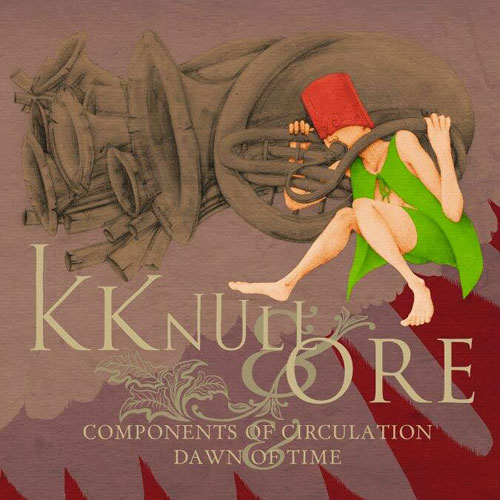 As the titles says you will be able to get your mitts on a Pre-Order for the upcoming collaborative 7″ from Japanese noise legend KK NULL and Birmingham’s tuba doom merchants ORE.

During this period you will be able to pick up a very reasonably priced bundle which will feature an exclusive t-shirt design courtesy of the very talented Alex Bertram-Powell (who was also responsible for the main record sleeve of course). These shirts will only be available for the pre-order period so once they are gone, they are gone so act fast!

Pre-Orders are available now from the Endtyme Records webstore HERE and you can stream both tracks below:

Read on for further info about both artists…

KK NULL – aka Kazuyuki Kishino – is the Tokyo-born composer, guitarist, singer and mastermind of highly influential progressive hardcore band Zeni Geva. He established the Nux Organization label in the mid-eighties to release his own works and subsequently acts such as Melt-Banana.

With the formation of Zeni Geva, Kishino gained worldwide recognition, releasing five albums produced by Steve Albini, working with Jello Biafra’s Alternative Tentacles label and recording two Peel Sessions, and touring throughout Europe, the US, Australasia and Japan.His varied and forward-thinking collaborations with the likes of Merzbow, Matmos, Z’ev, Chris Watson and many more have seen him gradually shift from guitar to electronic music, through which he has delved into noise, ambience, scattered pitch sculptures and droning isolationist material.

ORE are Birmingham-based tuba doom merchants. They formed in 2010 and, after a brief period as a trio, stabilised as a duo consisting of Stuart Estell and Sam Underwood, with a rotating cast of collaborators drawn from a wide range of other genres.

Just three years in, the project continues to evolve rapidly. From early drone/doom beginnings their music has lately drawn inspiration from Indian classical music and other improvisational influences to become much more difficult to define.

Last year the two acts were invited to collaborate for a one-off performance at Supersonic Festival. The result was a triumph, leading to the release of the shared, super-limited Archispirostreptus Gigas CD-R. They continue to combine their talents for this brand new limited edition 7” single featuring ‘Dawn of Time‘ and ‘Components of Circulation‘. It is mastered by Brad Boatwright at Audiosiege, artwork by Alex Bertam Powell.