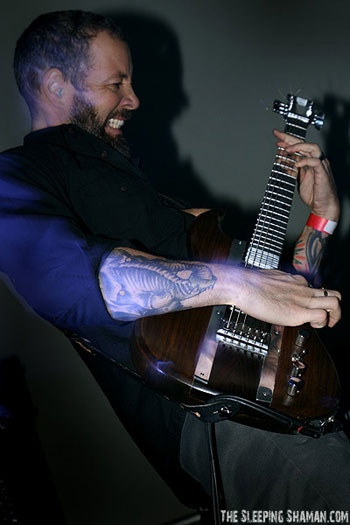 Entitled The Feather Tipped The Serpent’s Scale, the new EAGLE TWIN opus picks up right where the band’s acclaimed debut LP The Unkindness of Crows left off. In this installment the crows documented in the first album have battled the sun and were burned back down to earth as black snakes, the concept of the album continuing mainly on the snake and its various mythic and symbolic incarnations. Ultimately the great ancestral snake is transformed from its lowly beginnings back into a bird soaring upon the thermals. Recorded with Randall Dunn London Bridge Studio, also as with the first album, the record boasts some of the most mesmerizing and monstrous riff transformations from EAGLE TWIN to date.

EAGLE TWIN merges the talents of guitarist Gentry Densley of legendary post-hardcore/jazz icons Iceburn with the thunderous percussion of Tyler Smith formerly of Form of Rocket. Following a cult split 7″ with Night Terror in 2009, EAGLE TWIN‘s incredibly potent and unique multifaceted approach became apparent to the world when their debut album The Unkindness of Crows stormed doom and experimental music fans later that year.

Over 2009 and 2010 EAGLE TWIN toured and performed stateside and abroad alongside labelmates Earth, Sunn O))), Pelican, The Accüsed and countless others, in addition to showcasing their live devastation at SXSW, multiple The Power of the Riff shows and more. After receiving enormous support from print and online media outlets worldwide on The Unkindness of Crows, this forthcoming album has only been bridged by a killer split LP EAGLE TWIN released with the UK’s Pombagira in late 2010, and fans worldwide should expect nothing but the best from the new material.

More solid input on The Feather Tipped The Serpent’s Scale will be unveiled as the final release date and imminent international touring around its release are confirmed in the coming months.