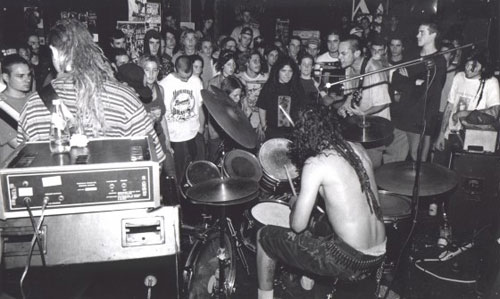 Initially released in 1994 as a five-track LP on the band’s own Life Is Abuse and Misanthropic Records then followed in CD format as a twelve-track brutalizer with help from Common Cause in Germany who booked the band’s very first European tour, DYSTOPIA existed as a four piece with Mindrot’s Dan Kaufman on lead vocals, their doom-laden, metal-tinged, down-tuned punk and “love earth-hate people” philosophy reaping instant adoration from the Orange County underground upon forming. The pure, unadulterated anger and misery that pervades this record places it among the most disturbing, depressing and misanthropic offerings in creation. Said Punk News in a 2007 review, “…a crust-metal classic… the kind of record you don’t want your parents to know you own, lest they send you in for counseling. Truly a sickening, painful, brutal album to listen to, but it is definitely an ‘emotional safety valve.’ Not something to listen to when you’re in a good mood, but if you feel like beatin’ the shit out of everyone you see (or worse) consider putting Human = Garbage on.” 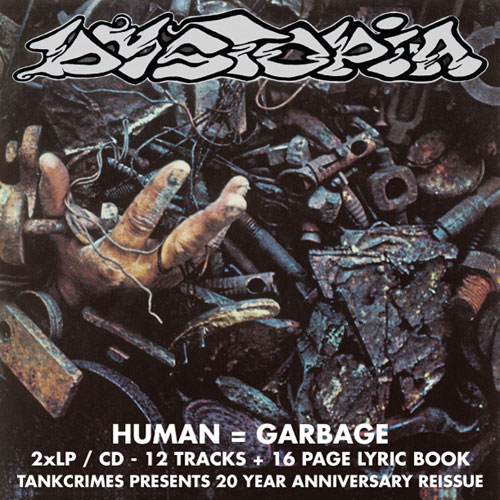 Included on the Tankcrimes edition are tracks from the band’s 1993 splits with Grief and Embittered as well as one additional tune only previously released on the CD collection. Visually, DYSTOPIA took influence from both anarcho-punk collage art and graffiti culture, blending images of societal decay, inner turmoil and humanity’s destruction of the planet to create a style that goes hand in hand with the music. The Human=Garbage 2014 version includes a sixteen-page lyric booklet, the imagery proving indispensable alongside these twelve tracks.

Set for official unveiling this Fall, the Tankcrimes reissue comes packaged as a double LP on clear vinyl with the aforementioned 7” x 7″ sized booklet as well as a download card for the digitally astute. The release will come available on CD as well. Fans Of Carcinogen, Mindrot, Kontraklasse, Kicker, Noothgrush pay heed.

As a precursor to the release, the label has offered up a tasty sampling of the record with Stress Builds Character and Hands That Mold, embrace the human hate below: