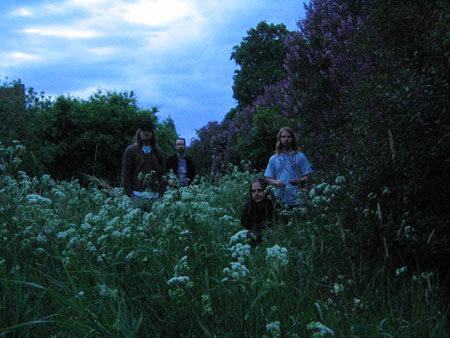 Finnish doom heavy rockers ABBOT will release their long-awaited new 7” vinyl single “Black Book” b/w “From the Holy Mountain” in winter 2012. The limited edition single follows ABBOT’s first single “Into the Light” / “Beyond the High Rise”. The single will be released by the band’s own Red Sky label.

“Black Book” clocks at 2 minutes 16 seconds and is one of the catchiest fast doom anthems recorded by man. It features the trademark vocal drawl of JP Jakonen on top of Jussi Jokinen’s heavy guitar riffs and a battering drum track. “From the Holy Mountain” continues the style of spiritual doom reminiscent of Black Sabbath’s earliest years.

The two-part-concept-single on cassette tape, “All and Everything”, is co-released by Red Sky and Black Floyd’s Tapes. The cassette features two songs, the as-epic-as-it-sounds “Beelzebub’s Tales to His Grandson” and a guitar-only-drone “Views from the Real World”. The tape is the first in a three-part series of “All and Everything” tapes influenced the work of the Armenian-Greek mystic philosopher G. I. Gurdjieff.

ABBOT will tour in 2012 and 2013 to support the releases and you can stream the video for “Black Book” below.