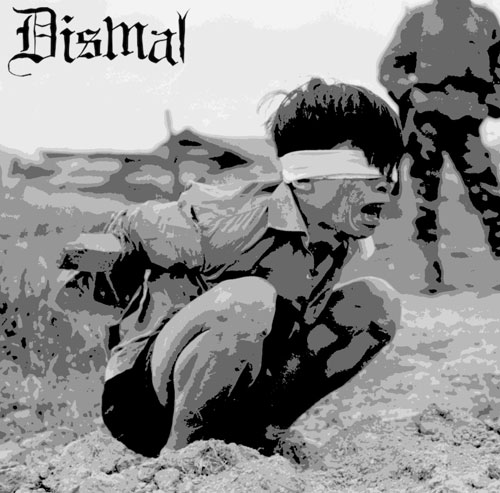 DISMAL formed in Liverpool in late 2013 by an alumni of such bands as Iron Witch, Black Magician, Wizard’s Beard and Crypt Lurker. Founded with the idea of creating depressive and hostile Sludge/Doom Metal in the vein of bands like Grief, Noothgrush and Toadliquor, DISMAL aim to share a similar nihilistic and misanthropic aesthetic displayed by their influences.

Rather than follow the current trend of doom metal bands whose lyrical content is rooted in fantasy or the occult, DISMAL aim to create music as a reflection of modern day urban anguish. Focusing on subjects such as depression, greed, vices and a discontent with the state of modern society. Although they readily admit to being heavily influenced by certain bands, DISMAL still manage to create their own unique sound, embracing a number of different song dynamics from post-rock-like build ups, riffs decaying in tempo to a crushingly slow pace, breaks into relentlessly fast D-beat and blast beat passages, and even colourful guitar harmonies.

Since the release of their 2 track demo, DISMAL have gigged consistently alongside bands such as Esoteric, Moss, Coltsblood, Wodensthrone, Bast & Corrupt Moral Altar.

And now, DISMAL have announced details of their new Self-Titled EP, a live recording that was captured using professional mics and gear during a gig in support of Coltsblood. Although the recordings were meticulously mixed and mastered, the aim was to capture the feel of a live performance without sacrificing the quality of sound, now drown your sorrows and listen to all 3 tracks on Dismal over at Terrorizer Magazine’s web portal right HERE.

With no labels involved, it will be self released by the band on the 2nd August 2014, initially limited to just 50 copies on CD as well as Digital Downloads and pre-orders are available now from DISMAL‘s Bandcamp page.