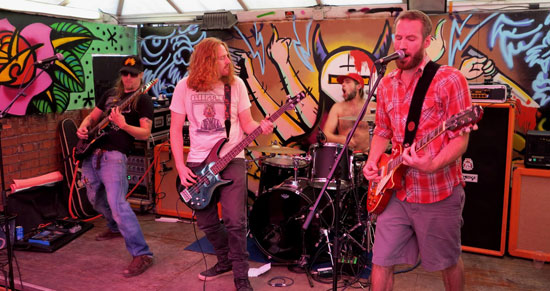 One of the UK’s greatest prospects in the stoner rock scene, Ten Foot Wizard will be leaping the mythical North/South divide for this year’s DesertFest London.

Bursting from the blackest heart of Manchester in 2009, Ten Foot Wizard do their best to part those eternal clouds hanging over the city with a warm, bluesy brand of stoner rock. Their first album, 2013′s ‘Return to the Infinite’, is the perfect showcase of that sound; bit parts Clutch, Sabbath and Misfits, with raw, heavy, chugging riffs and soul tinged vocals that grip onto your dancing bones.

Recently sharing the stage with fellow DesertFesters, Karma To Burn and Desert Storm at the Manchester date of their UK tour, TFW’s bluesy, desert-infused rock even infected the most arm-foldingest of punters into a groove. Now you can get your groove on too, at this years DesertFest.