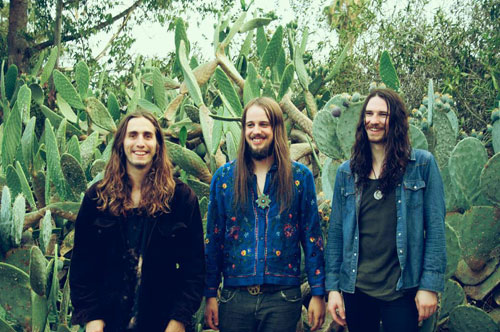 Next to join the annual DesertFest juggernaut are San Diegan blues-psych power trio, Radio Moscow; a band who manage to both chill you the fuck out and wake you the fuck up at the same time.

Part of that ‘70s revival scene that has invaded Europe in recent years – see Graveyard, Horisont, Gentlemans Pistols and Kadavar – Radio Moscow prove that the throwback vibes can be mastered on the more Western side of the Atlantic too. Starting out life as the duo of the multi-instrumentalist mainstay Parker Griggs and bassist Serana Andersen, Radio Moscow have been laying down the fuzz infused southern stomp since 2003 with their self-titled debut full length dropping in 2007. Three full lengths – including the absolutely stunningly swaggering sophomore, ‘Brain Cycles’ – and several bassists and drummers later, Radio Moscow have cemented their sound around the aching-heart blues strut of Parker Griggs, and a touch of distortion.

Definitely one to bring the foot-stomping and head-bopping to any swarm of onlookers, Radio Moscow are sure to slay in Camden this April. You stay bluesy San Diego.