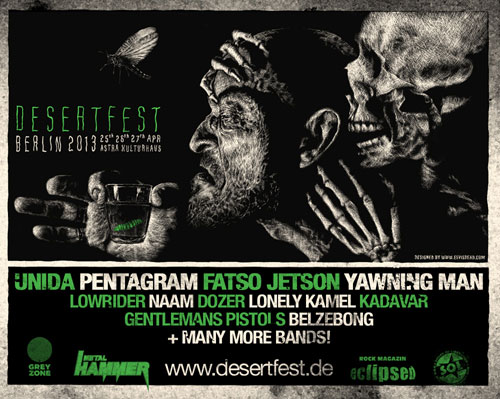 Sound Of Liberation UG in partnership with Greyzone Concerts is proud to present the second edition of DESERTFEST Berlin: the ultimate heavyrock – psycho-doom festival !!!

3 days of rock mayhem which takes placed between 25th – 27th April 2013 with 30+ performing acts on two stages, visual arts and hippie market…. the full package nested in the beating cultural heart of Berlin: Kreuzberg, in the famous ASTRA KulturHaus.

So far PENTAGRAM, UNIDA and now WITCHCRAFT have been announced as headliners along with re-union appearances from DOZER & LOWRIDER plus special appearances from the godfathers of DesertRock FATSO JETSON and YAWNING MAN.

The rest of the so far confirmed line up is as follows:

Early Bird tickets are now sold out, but Weekend Passes are still available for 82.50 Eur, further info on tickets can be found at www.desertfest.de/index.php/tickets.html and more bands are still to be announced over the coming weeks.