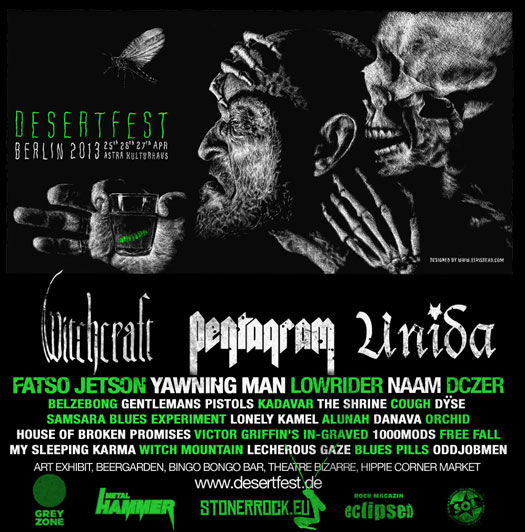 DESERFEST 2013 Berlin are proud to present to you a multidisciplinary French artist AURELIO DEVILLE who will come to DESERFEST Berlin to paint a fresco in live, on the Theatre Bizarre’s walls on Friday and Saturday (15h40 – 21h). DESERFEST Berlin also conducted an interview with the artist which you can read HERE.

And keeping in with the visual performances, Desertfest Berlin have also confirmed 2 further movies which will be shown over the weekend.

The first will be Marcus Robbin’s ‘Last Hippie Standing’.

This independent 45-minute documentary was the debut of German film-maker Marcus Robbin. His idea : a comparison of the original hippie movement and the modern Psychedelic Trance scene. For this purpose, he presented historic Super8 footage beside own material, which he shot in Goa around New Year’s Eve 1999. Impressing pictures that truly speak for themselves…

Additionally, he conducted interviews, among others with the veterans Swami William and Goa Gil. They give interesting insights and perspectives about the ideals and the attitude of the hippies and how it evolved and transformed over the years. Last Hippie Standing tells the story of a contradictory evolution that includes Indian spirituality, Western philosophy but also technology and globalization.

‘Last Hippie Standing’ will be shown in the Theatre Bizarre on Friday 26th and Saturday 27th at 17:00.

The 2nd movie isthe World Premier of Sandro Müntener’s ‘Beyond The Infinite’.

“If you make Rock music and smoke weed, then you get Stoner Rock, that’s basically it.”

Nothing more to add ? Well, Sandro Müntener’s ‘Beyond The Infinite’ does. Not by pigeonholing a musical style or trying to explain everything out there. But by drawing a portrait of a vivid underground community going its own way. It’s not only a film about music, but about dedicated people all over Europe wanting to create something altogether.

‘Beyond The Infinite’ will also be shown in the Theatre Bizarre on Friday 26th and Saturday 27th at 21:40.