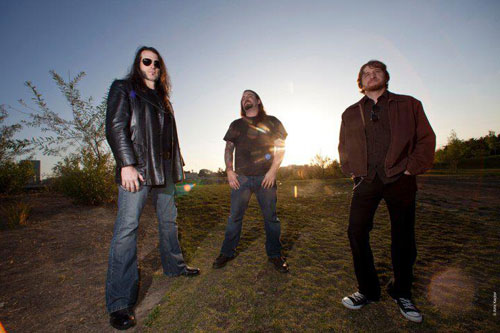 Recent sightings of Sasquatch have been confirmed!

Harking back to the age of stoner rock when tour-mates like Dixie Witch and Roadsaw were fryin’ it up Southern style, the band was formed in Los Angeles in 2001 by Philadelphian Keith Gibbs (guitar, vox) and Detroit natives Rick Ferrante (drums) and Clayton Charles (bass). Clayton left in 2007 and Chicagoan Jason Casanova (ex-Tummler, Volume) joined the fold.

Beer-soaked fuzzitude, impassioned singing and big foot-stomping grooves are the order of the day here – coming straight from the hearts of a gang who have been here, there and back again over the course of four albums. The most recent was last year’s ‘IV’, which they promoted alongside the likes of House of Broken Promises. ‘IV’ has gained great reviews across the board and all are in agreement that the band has succeeded in perfecting its super catchy song-writing while widening its visions and explorations. The trio display an obvious love of ’70s rock and there’s no mistaking the foot prints of masters like Blue Cheer, Mountain and Grand Funk.

As for other influences that may wet your whistle, if you like Fu Manchu then DesertFest 2014 is the time and place to get caught by these guys’ equally huge hooks!