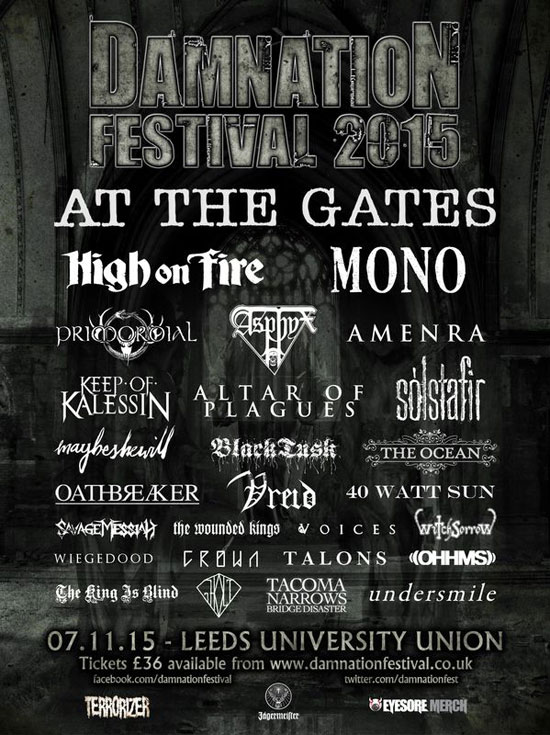 As Damnation Festival fast approaches its 2015 edition, the final bands have now been announced. The first of which is Celtic Metallers Primordial, who’ll headline this year’s Terrorizer Stage, vocalist Nemtheanga commented on the appearance… “We are delighted to return to Damnation Festival this year to headline the Terrorizer stage. Our last show there in 2012 was a great one and we look forward to more of the same this time around as we continue to support our Where Greater Men Have Fallen album. See you in November for our only remaining UK show for 2015!”

These final additions complete a four-stage bill which includes At The Gates, High On Fire, Mono, Asphyx, Amenra, Sólstafir, Altar Of Plagues, Maybeshewill, Black Tusk, The Ocean, Vreid, Keep Of Kalessin, 40 Watt Sun, Oathbreaker, The Wounded Kings, The King Is Blind, Witchsorrow, Voices and a UK debut for Wiegedood.

The capacity of this year’s Damnation has also been reduced by a staggering 1000 tickets, this is to ensure fans can move around the venue with more freedom, get served at the bar quicker, and most importantly, gain easier access to the At The Gates pit!

Damnation Festival 2015 takes place on Saturday 7th November across four stages at Leeds University, tickets, although selling fast, are still available for the bargain price of £36 over on the festivals website.