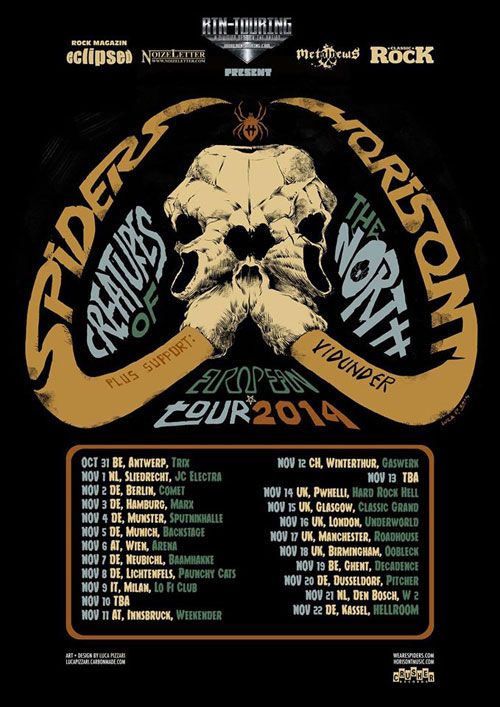 HORISONT and SPIDERS join forces to announce a European co-headline tour supported by VIDUNDER. A Swedish Classic Rock package hitting the road by the end of October 2014.

The full tour schedule is as follows:

Pontus Jordan of HORISONT commented on the tour: “Rockin’ all round Europe again, good times ahead! Hanging out with our good buddies in Spiders and the young strapping lads in Vidunder, you just know it’s gonna be good! We’re also looking forward to playing our new single live and burning you in unquenchable rock ‘n’ roll hellfire”.

Added Ann-Sofie Hoyles of SPIDERS “There are many reasons why this will be the best tour ever! One of them is that we will get to hang with our friends in Vidunder and Horisont, and even get to see them live every night. Another is that we get to tour in support of our upcoming album Shake Electric. Can’t wait!“.

While Jens Rasmussen of VIDUNDER concluded “To ride the bus, eat sweaty cheese sandwiches with coleslaw and play hard rock for almost a month may well be a bit of a dream come true. And to do it with two of the finest bands in Sweden! It will be full speed from day one!“.

Read on for more info about each band….

HORISONT
Since forming in 2006, this Swedish quintet have steadily established themselves as one of Europe’s premier underground Rock bands.

Their first two albums made it plain that the band have tapped directly into the heart of heaviness and guitar-wielding derring-do. Now, with their latest masterpiece, the vividly realised Time Warriors, HORISONT are raising their game, refining and re-defining themselves and leaving the competition spluttering in the dust.

In case you’ve already attended one of their latest shows, you just know that it was about time for HORISONT to pick up the flag and to headline shows throughout Europe.

SPIDERS
A mix of garage/proto-punk and early hard-rock with bluesy melodies, brimming with the energy and raw riffs of the early ’70s, the high-octane three min raunch of Suzi Quatro and The Dictators and enough modern day suss to put any contemporary “stoner’ or “garage band” to shame.

SPIDERS started in 2010 and their music has been described as “70’s fragrant hard rock”, “Motörhead bash” and “a riff party” and highly acclaimed by magazines like Classic Rock, Record Collector and Metal Hammer to name a few.

In October 2012 SPIDERS released their debut album Flash Point which got nominated for Best Rock of the Year by Sweden’s P3 Gold Music Award (hosted by the largest national radio). Since the album release SPIDERS have been busy touring Europe with bands like Graveyard, Kvelertak and Blood Ceremony.

In early October 2014 SPIDERS will release their long-awaited second album, so you’ll definitely have the chance to check out the new stuff!

VIDUNDER
Bluesy 70’s rock with a touch of garage. The band has joined bands like Spiders, Horisont and Blues Pills by releasing their debut album on Crusher Records.

VIDUNDER was formed in mid-2011 and released their self-titled debut album by the end of May 2013 leading to fine reviews and features in magazines like Classic Rock, Rock Hard and Visions to name a few. During the last year VIDUNDER has grown from being a trio to a quartet, and made several extensive European tours and played festivals sharing the bill with bands like Graveyard and Red Fang among others.

GOAT Unveil New Video For The Track ‘Hide From The Sun’