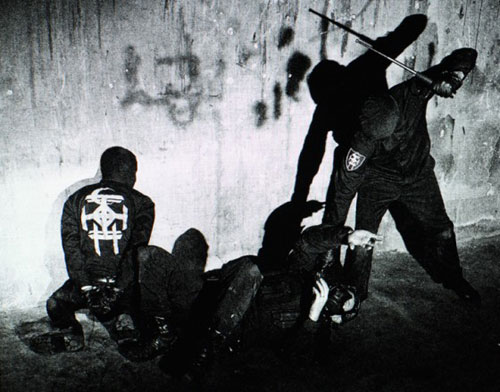 minister of propaganda, Seward Fairbury, has turned up missing from his place of residence this week in California after an apparently violent confrontation within his home. CORRECTIONS HOUSE member, Scott Kelly said, “The last time I had any contact with Seward was ten weeks ago; it’s not uncommon to not see him for weeks at a time, but he always keeps us in the loop with a postcard or a phone call  about once a month. We went by his trailer and it was completely trashed; it looked like there had been a serious disturbance. If you’ve ever met Seward, you know he’s mean as fuck and he isn’t gonna go anywhere he doesn’t want too. We’re reaching out through our connections and through Seward’s extensive family and trying to figure out what is going on.”

The Lake Co. Sheriff’s office has issued a simple but ominous statement saying that the matter is under investigation but that they expect no cooperation from the Fairbury family, from his friends, or his neighbors in the the matter whatsoever.

CORRECTIONS HOUSE will soldier on without Fairbury, and continue to do work. They are releasing a live record due out this Fall entitled Writing History In Advance through War Crime Recordings, will continue to work on their next full length due out in early 2015 and will appear at the Roskilde Festival in Copenhagen, Denmark this Friday, July 4th. Additionally, the band will support Sleep for two nights in Chicago on August 28th and 29th at Thalia Hall.

CORRECTIONS HOUSE — the bastard sound manipulations of Mike IX Williams (Eyehategod), Scott Kelly (Neurosis), Bruce Lamont (Yakuza), Sanford Parker (Minsk) and their minister of propaganda, Seward Fairbury — is a meeting of minds and ideologies that sees all four members incorporating their obvious individual talents and voices but simultaneously carving paths away from the sounds for which they are usually known. On most recent full-length,  Last City Zero (review here) released last year via Neurot Recordings, they traverse tectonic plate-shifting doom and the downcast gloom of Kelly’s usual ouevre into mutated industrial hissing and clanging EBM beats from Parker, squalls and drones of oblique saxophone from Lamont and Williams’ familiar phlegm-drenched fire-spitting ire and all points in-between.