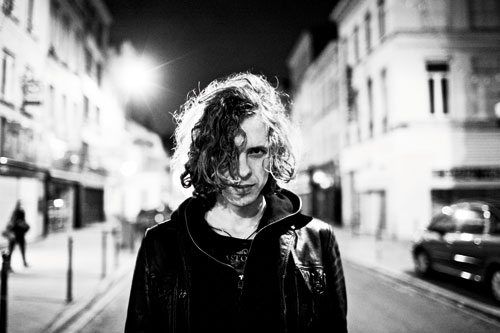 It comes with real pleasure that we can share another gem from CONNY OCHS‘ latest album ‘Black Happy‘ today. Feast your eyes on this collage video with album track ‘Faces In The Crowd‘ – an ode to traditional Americana stripped of instruments, showcasing Och’s soulful vocals in all their raw power.

CONNY OCHS hails from Germany and has been making music for over a decade now in various incarnations – with bands, unique projects and as a solo artist. While local punters endorse and worship his musical endeavours, and especially his first solo album ‘Raw Love Songs’ which was released on Exile On Mainstream Records back in March 2011, it was the collaboration with Scott “Wino” Weinrich on the 2012 album ‘Heavy Kingdom’ that really put the Conny on the international map.

CONNY OCHS will follow up his debut solo release with a brand new album ‘Black Happy’. An album of earnest, melancholic songs where Conny bears his soul with raw emotion, combining his beguiling vocal and melodic guitar style. What is channeled into his music, tone and lyrics are indisputable personal truths, the kind that are deeply rooted in the blackened parts of the human soul. Sometimes happy, sometimes sad, sometimes nasty, sometimes nice, sometimes begging, sometimes proud, sometimes cheerful, sometimes bitter, sometimes lost, sometimes found. And with this, CONNY OCHS reaches a stark authenticity that draws you in, makes you part of the music and deserves to be devoted.

The music on ‘Black Happy’ ultimately draws upon a tradition and history of great acoustic craftsmanship created by some of America’s finest songwriters (though not restricted to the American continent). Through that inspiration especially, Conny explores the realms of how your inner self can be sonically portrayed, once you are on your own and armed with only a guitar and your voice. Yes, this musical path is a well trodden one, but it isn’t worn out yet and Conny walks the road in his own wholehearted way.