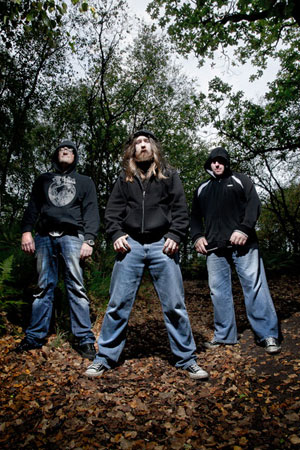 The live recordings were mixed and mastered again by James Plotkin in New York just like he did for the Monnos album and the artwork was once again in the hands of the master Tony Roberts which you can check out below and the planned release dates for the different formats are as follows:

In other CONAN news, 2012 also saw the band release several shirts, some in limited numbers. In 2013 they have several new designs planned, but first they wanted to re-release some of out established designs. This will be setup a little differently. For all those that pre-order the new designs this week, there will be a multiple colour options of the Monnos, Sentinel and Horseback Battle Hammer designs. For all preorders please head over to the bands Big Cartel store at http://conan.bigcartel.com.

Available colours: Black, Charcoal, Cardinal, Dark Chocolate, Forest Green, Ash Grey, Sports Grey, Red. In a few weeks the designs will all revert back to their original colours, white on black print apart from Horseback Battle Hammer which will be black on red.

2013 will see us head out to Europe in February, Finland in March, UK in April and Denmark in May which also takes in an appearance Heavy Days In Doomtown Festival in Copenhagen, the dates are below and for all venue information including maps, please visit www.stereoposters.com/conan.